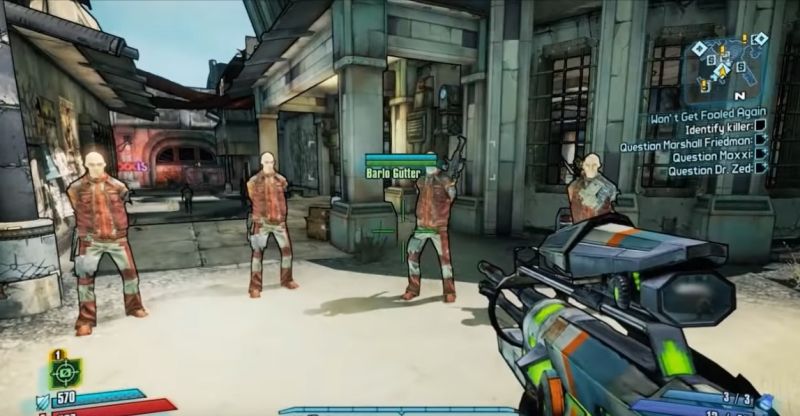 Won’t Get Fooled Again is an optional mission in Borderlands 2.
At level 16 the rewards are 1305 XP, $55 per task and Law which is a unique pistol manufactured by Jakobs.
It gives +100% melee damage bonus and thus very useful for melee-focused characters such as Zero’s Bloodshed or Krieg’s Mania builds.

Marshall Friedman asks for help in solving the murder case of Justin Macready.
He says that one of the Gutter quadruplets in front of him pulled the trigger and killed Justin.
You should talk with Moxxi, Dr. Zed and Marshall Friedman to reveal information discovering which of the four suspects committed the crime otherwise, Marshall will have to hang them all and waste his time.

The killer is always the sniper because he is the only one who fits all three witness conditions:
•  he is carrying a weapon that fires bullets
•  he has a shield
•  he is at full health

The only person with a single-shot weapon, shield, and full health is Barlo Gutter.

• If you selected the wrong person, the real killer will speak and try to escape.
This delay gives you some time to select another suspect.
• The mission will be completed regardless of who is selected as the culprit.

Marshall Friedman: Can it, boy.

Hark Gutter: You got nothin’ on us. Wastin’ yer time.

Ennis Gutter: Hey. ‘Tween you and me? It was Hark. Dude’s shady as hell.

Ennis Gutter: Look — we both know it’s Shin. Just pop him so I can get back to my weldin’.

Marshall Friedman: You gonna make me get the pepper spray? Shut up.

Barlo Gutter: Alright, I confess — that you’re a jackass!

Marshall Friedman: Don’t make me come over there, Gutter.

Shin Gutter: Stare all you want — we ain’t gonna break.

Marshall Friedman: Hey, if you’re not doin’ nothin’, could use some help with this.

>> Accepting the mission
Marshall Friedman: Hey. Feel like solvin’ a murder? I’m the Marshall around these parts. One of these Gutter quadruplets pulled the trigger on that boy over there. Consider yourself deputized — ask around at Moxxi and Zed’s, figure out which one of these identical scum-stains pulled the trigger. Otherwise I’ll just have to hang ’em all, and I don’t got that kinda time.

>> Interview Marshall Friedman
Marshall Friedman: I heard a gunshot a couple hours back. Naturally, I ignored it, until somebody came and got me. Uh, I found this boy bleedin’ onto the concrete, a single bullet in his throat. And I saw one of these Gutter boys runnin’ away. That’s all I know, right now, more’s the pity.

>> Interview Moxxi
Moxxi: A Gutter brother? Oh, yeah — one of them barged in here a couple hours ago, demanding safe haven. I told him I couldn’t make any promises, and he got bitchy. I had to pull out Rubi and put a few rounds in him — his shield ate the first two, but boy, did he feel the last one. Nobody threatens me in my joint.

>> Interview Dr. Zed
Dr. Zed: Sure, I pulled a round outta one of them Gutter boys. I healed him up as good as new, but, the little skunk overpaid me — six thou– five thousand bucks. You don’t need to confiscate that or anything, do ya?

>> Correct Suspect
Marshall Friedman: Alright, if you say so.

Barlo Gutter: Yeah, I did it! I ain’t sorry! Why don’t you try and–

Marshall Friedman: Good job, deputy. Barlo thought he could snipe an innocent man and get away with it. But that…

Marshall Friedman: …was a long shot.

by Lucas on October 9, 2019
Mission Brief Kill Yourself is an optional mission in Borderlands 2 that takes place in Eridium Blight The mission is given by Handsome Jack via the Jack Bounty Statue and the rewards at level 29 are 3,715 XP + 12 Eridium or 11,145 XP. Walkthrough Handsome Jack has a proposition for you, go to Lover’s […]