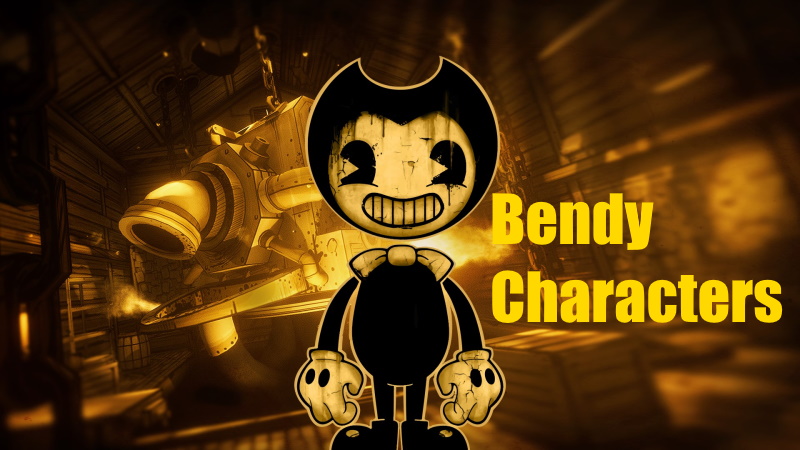 Bendy and the Ink Machine quickly became one of the more popular games in the category of puzzle action and survival horror video games.
This time the focus will be on Bendy And The Ink Machine Characters.
We’ll get brief information about each character, the forces that shape it and the places where we can encounter it while playing the game.
Knowing the background of a figure can help to complete the picture and also some tips are provided.

Henry is the game’s main character and the one you play.
He is a retired animator who returns to his old workplace, Joey Drew Studios, to explore the mystery and to fill his ex-business partner
Joey’s request to discover “something special”.
It appears that the ink machine is more than a simple tool because it can give life to cartoon characters, but the results are horrifying.
So Henry needs to fight is way out and escape the studio from the inky horror cartoons inside. 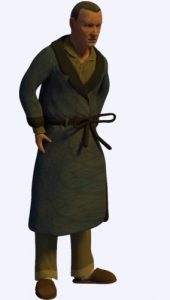 The CEO of the animation Joey Drew Studios.
The one who invited Henry to explore the workplace.
His workers describe him as a greedy, unethical and selfish individual who demands a lot but gives them poor working conditions.

The studio’s janitor who complains about other employees making his job harder and finish his audio blogs with: “I’m out of/outta here!”

A repairman who worked for the Gent company to repair the damages in the studio’s piping.
He is also the husband of Allison Pendle. 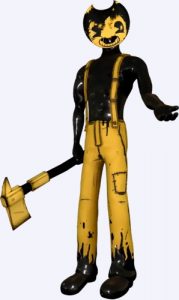 The director of the Music Department at Joey Drew Studios, the one who wrote the music for Bendy’s show.
Because he was used drinking ink bottles that were used for the Ink Machine on a daily basis he transformed into a humanoid ink creature.
He becomes one of the major antagonists helping Bendy in the game trying to get his human body back.

The original voice actress of the character Alice Angel which she starts loving.
She dreams to make it big and was voicing other characters as well until Joey replaced her with Allison Pendle.

The accountant of the studio, he complains about Joey’s expenses and workload.
He became an ink creature after the ink affected him and lost his mind.

A renowned theme park architect who became jealous of Joey taking all the credit.
After corrupted by ink he becomes the “monster machine“, that appears as a boss in Chapter 4.

Former lyricist of Joey Drew Studios and Sammy’s assistant who turned into an ink monster “swollen” Searcher in Chapter 2. 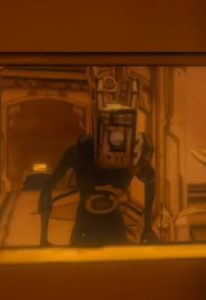 One of the projectionists of the studio who transforms into a monster called the “Projectionist” in Chapter 3.
The Projectionist has a projector for a head and he dwells the darkness throughout the studio.

An Irish toy designer who created several toys based on cartoon characters made from Joey Drew Studios.
He made the Bendy dolls, but in Chapter 3 he turned into a giant Searcher as a secret boss.

Bertram’s assistant engineer, who manufactured the animatronics for Bendy Land.
She was later turned into a Lost One, endlessly sobbing over her paranoia.

Bendy is the main cartoon character created by the animation company Joey Drew Studios as their mascot.
Along the game Bendy appears on cardboard cutouts, clips of cartoons, posters, plush toys, cutout mask, status and more.
Ink Bendy is the deformed shape that brings the cartoons to life by the ink machine. 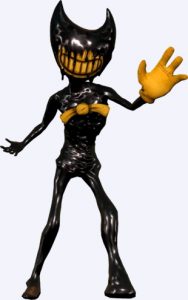 This is the primary evil cartoon character that was made from Joey drew’s bad attempt to create life out of Bendy mascot.
The figure’s body is covered with ink and her head resembles Bedny.
Ink Bendy has no soul and also lacks human intelligence and not capable of speaking.
When he appears, he creates an ink mask all around and causes ink to drop from the ceiling.
There is no weapon that can kill Ink Bendy, so the best strategy is to hide from him and wait until he passes.
Miracle Stations along the way provide a safe place to hide from Bendy 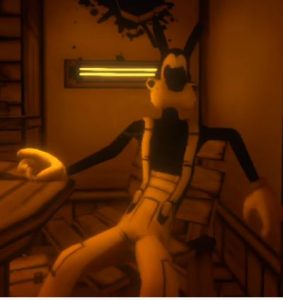 Boris is a cartoon character of a wolf who shows similarities to Goofy.
In chapters 2 and 3 he accompanies Henry to help him, but after captured by twisted Alice he transformed into “Brute Boris”
fighting Henry and trying to kill him in Chapter 4. 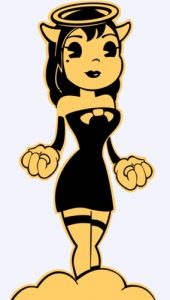 Alice is a cartoon character that we meet first in chapter 2, her talent is to sing and dance.
Originally she was voiced by actress Susie Campbell but later replaced by Allison Pendle.
She is described to be a part angel and part demon but shows to have all heart. 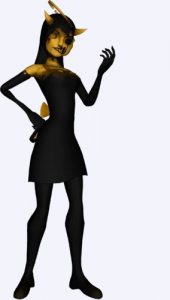 It is the physical form character of Alice Angel, she may be friendly but manipulative at the same time.
She also vain and obsessed with her beauty and perfection and will do almost anything to keep that.
She dislikes Ink Bendy and all forms of ink monsters and appears in chapters 3 & 4. 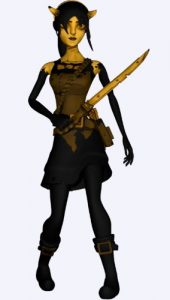 It is a character and the alternative form of the original Alice Angel.
Allison has common features with Twisted Alice but she’s beautiful and kindhearted and her look if perfect without any deformations.
She and Tom aided Henry throughout the studio in the two final episodes.

Tom is Allison’s companion and looks very similar to original Boris.
At the beginning of chapter 5 he is not trusting Henry, but later together with Allison, they save Henry’s life from Sammy in the Lost Harbor.
They continue to follow Henry in the Film vault until arriving at the Ink Machine-like fortress where Henry is forced to go on alone. 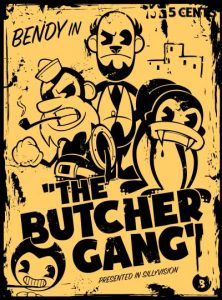 A trio of characters of Charley a gangster leader, Barley a sailor, and Edgar, a spider.
Henry encounters them several times along the game and needs to fight the inky monsters they become. 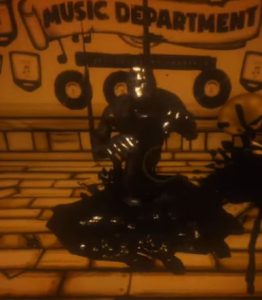 These are humanoid ink creatures that rise from ink puddles.
They are Henry’s enemy and he will meet them in many places in the studio. 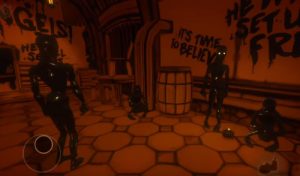 These are the souls of human workers who become ink monsters.
Henry first encounters them in Chapter 4, where they look sad, depressed and out of hope, roaming around and harmless.
In Chapter 5 however, they follow Sammy and hold weapons to stand against Henry, Allison Angel, and Tom.

Dylan has a passion for PC games of all kinds since he was a kid. He spends hours exploring and diving into the fascinating world of gaming. When he is not playing, he likes traveling and working on his retro motors collection.
You might also like
Bendy and the Ink MachineGAMES