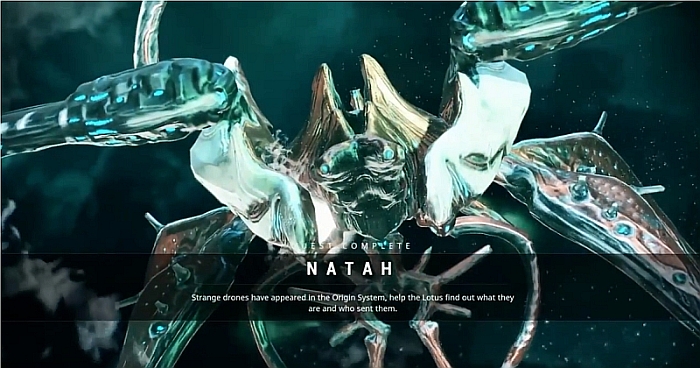 Natah is a main Warframe quest involving the mystery behind a strange drone appeared in the Origin System and the Tenno mission is to help The Lotus find out what they are and who sent them.

How to scan drones in Grineer Sealab on Uranus?

How to start natah quest?
Go to any Grineer Sealab tileset Mission on Uranus (any Mission except Ur, Caelus or Assur), and then successfully scan an Oculyst which is a mysterious drone that can randomly appear during missions.

During the mission, the drones will spawn and when they are near, you’ll be hearing some alert audio and see a visual cue that looks like a blue flashing lights.
The drones spawn in pairs but you need only one out of the two drones in order for the quest to start. Scan them, than complete the mission and extract.
You’ll receive an Inbox message from the Lotus “Tenno, I require your help.” that will begin the Quest.

Lotus presumes that the mysterious drones belongs to the Corpus and sends the Tenno to Gaia, Earth to collect more Information by scanning new drones. You’ll need to track the drone’s location while possibly encountering Grineer enemies in the way until you arrive at a unique wreckage hanging off a cliff.

When you finish to scan the Old War wreckage, Lotus will be more confused and will give you a new task to scan two more scouts that will appear on your map.

After scanning the last drone, the Lotus become shaken and surprised by the fact the drone is
an Oculyst. She tells the Tenno to be safe while abending him in the mission and letting Ordis to become the mission operator. Ordis directs the Tenno to quickly head to extraction.

Ordis tells the Tenno that Teshin, the Conclave Master, agreed to help them in the absence of Lotus. Teshin will ask you to go to Cassini, Saturn, in order to obtain more information about the mysterious appearance of the drones.
You’ll help Teshin by doing a mobile defense mission while hacking into three Grineer Consoles.

Upon finishing the mission, the player will get a message into his inbox, this will be an intercepted message by Tyl Regor (the final boss of the Uranus) that Teshin was able get.
The Tenno now need to find a Grineer Sergeant named Scur that will lead him to the Tomb.

You’ll now be on a capture mission at Grineer Sealab on Sycorax, Uranus that will lead you to capture the Grineer Sergeant Scur, a Drahk Master armed with a Grakata.
As you start the mission, Teshin will tell you to find the Sergeant to reveal the mysterious tomb and suddenly the Lotus will intervene saying that Teshin is endangering the Tenno and has no authority to do so.

Here is the dialog between the two:


Teshin : “But Why now? Afraid of what we’ll find?”
Lotus : “I had to cover my tracks. But I see that Teshin has been leading you into an even greater danger”
Teshin : “The beast soon stir, Lotus, revealing much. It will awaken and become whole again”
Lotus: “The SENTIENT.”
Teshin : “You know this one, don’t you?”
“He knows where the Tomb his. Apprehend him”

Upon successfully finishing this mission and obtaining the information of the mysterious tomb, Teshin asks Lotus to say what the next move will be, the Lotus immediately orders the Tenno to stop Tyl Regor from entering the tomb even at high risk.

This is a Survival mission on Ariel, Uranus, where the Tenno needs to fight against Grineer units for 10 minutes.

As the mission progresses, Tyl Regor manages to open up the artifact he is excavating despite warnings from Teshin (which he calls “pseudo-Tenno”) and the Lotus .After unearthing an Exilus Adapter from the ruins, Tyl Regor also manages to release a Sentient, who begins to refer to the Lotus as “Natah”.

As the player’s return to the Orbiter Teshin asks what Lotus is hiding?
The Lotus explains that “Natah” was her old name and not who she is now and that we need to seal the Tomb. Because the sentient is awake the Lotus urge the Tenno to be on the way to
destroy the tomb.

This time you need to do a 10 waves Defense mission on Desdemona, Uranus where you need to protect a bomb that will destroy the tomb during its lengthy arming process.
There are four objectives located at different parts of the map where the Tenno needs to switch between them on each wave.
If you need assistance during the mission you can always use a specter to help you.

During the mission, the Sentient speaks to Natah (the Lotus) calling her his daughter and asks her why did she betrayal him and why she didn’t finish the sequence she started ?
Tyl Regor will makes some cynical remarks between the waves asking lotus if she has a common history with the Oculyst.  Teshin also wonders what Lotus is hiding from them.

As the mission ends It appears that Lotus herself was a Sentient who betrayal.
Lotus explains that she was supposed to destroy the Tenno during the Old War, but couldn’t do that.

As the war was over ,she hide the Tenno away in the second dream resisting her nature and what she was trained for.
She explains that Sentients become incapable of breeding upon arrival at the Origin system, it was a flaw that they never overcame.
With the Old War coming near at the end, there was no need to kill the Tenno.

Teshin conclude that the Lotus (Natah) desired children of her own,
The Lotus affirms that she has become the Tenno’s ‘mother’ and the daughter Natah not exist any more.
“Natah was the daughter until I destroyed her. Now I am the Lotus. Now I am the mother.”
—Lotus

Q1: I just finished to scan the drones in Uranus Grineer Sealab, but the mission does not detect that I have scanned the drones, how to proceed?

A1: Due to enemies becoming unscannable once their Codex entry is complete, completing the Oculyst’s entry will render the first stage of the quest incompletable with a conventional Codex Scanner.
In this scenario, a Synthesis Scanner will be required to proceed with the quest, as these can continue to scan enemies regardless of their entry completion status.

A2: Drones should show up in almost any Uranus sealab mission, before the dornes show up, you’ll hear some jingling and see some flashing cue.
see the section Scan drones in Grineer Sealab on Uranus.
The Oculyst drones should spawn in pairs, but you’ll need to scan only one.

Q3: How to start natah quest?

A3: To unlock this quest, you need to be with at Mastery Rank 3, Unlock the uranus junction and Scan drones in Grineer Sealab on Uranus.

Note: After the player finishes defending the bombs to seal the tomb, the quest may become unfinishable due to a glitch in the dialog between the Lotus and Teshin.
This issue can be resolved by setting Natah as the active quest and watching the cinematic for The Second Dream. You may have to force quit the game after doing so, however.