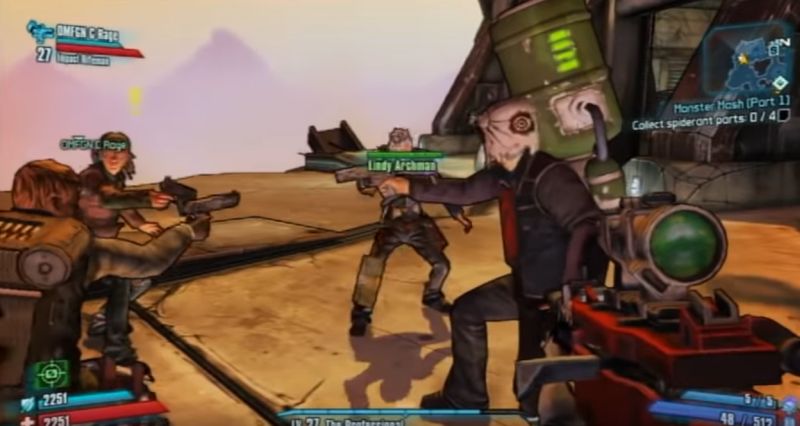 BFFs, Best Friends Forever, is an optional side mission in Borderlands 2 that occurs in the Sanctuary.
You can get access to it after completing the story mission Where Angels Fear to Tread Part 2 given by Roland.
The mission is given by Sam Matthews and the rewards at level 25 are 531 XP (experience points), $136 plus Order which is
a unique shield with above-average roid damage coupled with average to low capacity.

The mission starts with four friends accusing one another of stealing the money they had looted together when they were in the Truxican standoff.
They will ask you to help in finding the culprit.
Upon accepting the mission, Marshall Friedman will make contact by ECHO, saying that only one person will state the truth and that the other three friends are lying.
He requests assistance in uncovering the identity of the thief and shooting him or her.

Your objective is to find and shoot the thief.
Each member has his own version.
Lindy: Sam stole the money
Jim: It wasn’t me
Sam: O’Cantler is the thief
O’Cantler: Sam is lying

If you shoot Jim, a fair amount of money will drop from his corpse.
Shooting anyone else will cause Jim to reveal that he was the culprit and run away, although the reward for the mission will be given anyway. 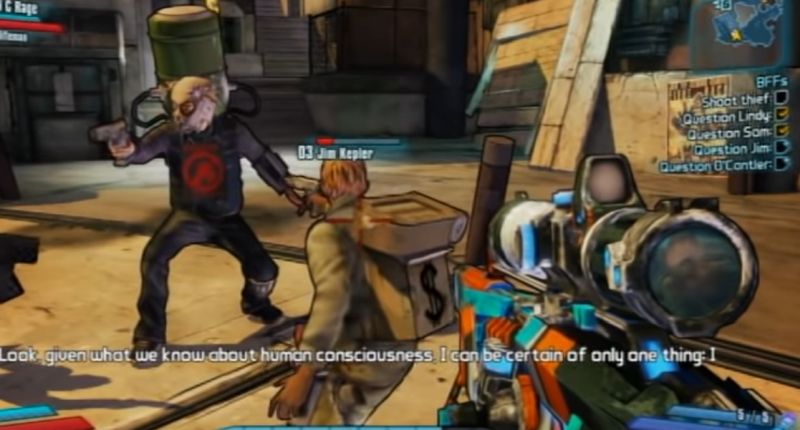 >> Vault Hunter finds 4 individuals pointing guns at and accusing one other, they stand In front of Sccooter’s garage

O’Cantler: This is dumb.
Jim Kepler: Says the bastard that probably stole it in the first place!
Lindy Archman: Gee, Jim — you’re awfully quick to start pointing fingers!
Sam Matthews: Come on, guys, we’re friends! Let’s calm down!
O’Cantler: This is so dumb.

Sam Matthews: Uh, Vault Hunter? Little help? Look, it’s a long story…
Jim Kepler: No, it’s a short story!
O’Cantler: I write short stories.
Jim Kepler: We were supposed to divide the take four ways, but somebody up and nicked it before we could split it up!
Marshall Friedman: Those idiots still screamin’ at each other? Marshall Friedman, here — if you wanna do me a solid and shut those morons up so I can get back to my nap,
know that only one of ’em will tell ya the truth. The other three are liars.
If you could figure out which one of ’em robbed the others and pop ’em in the head for me, that’d be awesome.

>> Vault Hunter asks questions from each member:
Lindy Archman: Sam stole the cash. Without question. After she and O’Cantler were done… celebrating our successful heist, I saw her stuff the loot down her pants.
Sam Matthews: Look, between you and me? O’Cantler’s the thief. When we were making out, he was all, Yeah, baby, I’m gonna steal all that money!
and I was like No, don’t do that! and he’s like Oh yeah baby, I’m gonna! and I was like That’s so wrong.
Jim Kepler: Look, given what we know about human consciousness, I can be certain of only one thing: I didn’t steal the money. I know my own mind, and I know my mind didn’t steal it. If I knew everyone else’s minds I might be able to help you a bit more, but, sadly, I can only speak for myself. And I’m doing that now. Speaking, to say that I didn’t steal the money.

Lindy Archman: Hunh — guess Jim did steal the cash.
Sam Matthews: But we were friends! That’s sad. But maybe we… maybe we learned something.
O’Cantler: Yeah. We learned that Jim stole the cash.

>>If Vault Hunter shoots anyone but the actual thief
Sam Matthews: Ow! It wasn’t ME!
Lindy Archman: What the hell?!
O’Cantler: Ouch, mate!
Jim Kepler: They weren’t the thief! They didn’t have any money on them! SCREW IT!

>> They start shooting at each other and eventually all get killed.

by Lucas on October 9, 2019
Mission Brief Kill Yourself is an optional mission in Borderlands 2 that takes place in Eridium Blight The mission is given by Handsome Jack via the Jack Bounty Statue and the rewards at level 29 are 3,715 XP + 12 Eridium or 11,145 XP. Walkthrough Handsome Jack has a proposition for you, go to Lover’s […]