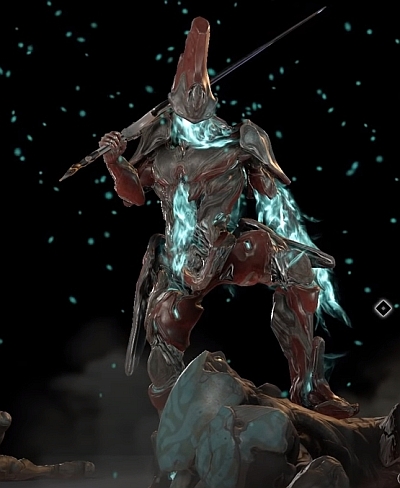 Mask of the Revenant is an optional Warframe quest on the issue of a decorative mask for the Operator.
The mask story is about the tale of a Warframe left behind to prevent the return of the Sentient Eidolon (enemies of the Orokin during the Old War).Once completed the quest reward is a blueprint for the Revenant warframe.

How to start Mask of the Revenant Quest

Once you have achieved the second rank with The Quills (Observer) go to Cetus and talk with Nakak.
Nakak is a young masks seller, located on the left side of the Cetus market, directly across from the gate to the Plains of Eidolon or you can use “Fast Travel” from the menu.
You should see a little X marker over her head for the quest to be available.
To initiate the quest, Talk with Nakak and select the “Mask?” dialog.
She will say that she received a strange mask, called the “Mask of the Lost One“, from Onkko, and will sell it for one Cetus Wisp.
Buy the mask and prepare for the mission.

How to equip mask of the revenant?

You need to wear the mask and go into the Plains of Eidolon at night.
To equip the Mask switch to Operator: Equipment–> Operator–> Appearance and then under hood select “Mask of the Lost One“.
At the plains at night time, follow the marked white waypoint at the southwest side of Gara Toht Lake.

Tip to find mask of the revenant locations

If you don’t see the white circle on the mini map, press the M shortcut to show the level map and to view the white waypoint .

You should see a large spectral silhouette of an Eidolon that vanishes into the ground and near the shore line you will find a small energy fragment that you need to touch.
Touching the energy fragment will unlock “A New Threat Looms”.

Nakak will have a vision and will start seeing things. She’ll say that the lake is where Gara vanquished the Sentient and his essence felt into the ground trapped in some unworldly between seeking to emerge at moon rise.
Then a warden (warframe) was placed to prevent the Sentient from returning until it was lost and now Nakak asks for the Tenno help to rebuild it.
You need to go back to Cetus talking to Konzu and asking for Bounties to find and build parts for the Revenant warframe.
In the case where the player has at least one component of the Revenant warframe, or purchased a pre-built Revenant from the Market, Nakak will tell the player to proceed.
Additional main blueprints can also be bought from Cephalon Simaris for 100,000 standing.

To continue in the quest, return to the Plains of Eidolon at night.
Follow to where the white waypoint directs to find another small blotch of energy.
Nakak will have another vision from the Unum (a living consciousness dwelling in the Orokin Tower which the Quills worship and revere) mentioning the warden and the Sentient fight.
You need to go back to Konzu and make some Bounties for getting another pieces for the Revenant warframe.

Back into the Plains at night you’ll need to find the 3’rd and final Sentient energy fragment between Gara Toht Lake and Renthi Spring. Search the area for the energy fragment as it should be near the lake.
It will try to escape and you’ll see in the water Revenant (the lost one) drowning while trying to pull itself up extending a hand to the Eidolon.
Nakak will say that this is not some trapped Warframe spirit, but it become the mask of the Eidolon and we can’t allow him to rebuild itself, the Tenno must destroy it.
As Nakak finishes the tale, a Revenant Specter (the mask for the Eidolon) equipped with Phantasma shotgun will appear and begin attacking the Tenno. Defeating the specter rewards in Revenant Warframe blueprint.

You need to do these Bounties to obtain parts for the Revenant Warframe.
Search and Rescue
An Ostron has gone missing on the plains. Find them and bring them home.
Levels 20-40 mission where you can get the Revenant Systems blueprint with 8.42% to 20.51% drop chances.
This Bountie has also Gara Neuroptics blueprint in the reward pool.

Spy Catcher
There’s a Grineer spy in Cetus. Put pressure on the Grineer and force the spy out.
Levels 30-50 mission where you can get the Revenant Chassis blueprint with 8.51% to 19.05% drop chances.

Capture The Grineer Commander
A high-ranking Grineer has landed on the plains. Bring them to the Lotus.
Levels 40-60 mission where you can get the Revenant Neuroptics blueprint with 6.76% to 10.20% drop chances.