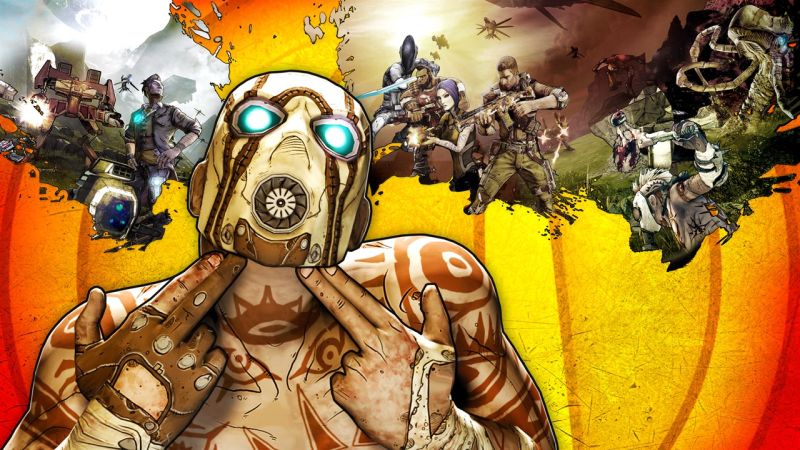 Initially, the game had only four-player characters to play while two more are latter addition in the two coming DLC.
Overall you have six characters to choose from called Vault Hunters, each with a unique skill and special ability.
To advance to the next level, the player has to gain experience points.
The original game (borderlands) had 4 Vault Hunters that turned into NPC this time.
They serve as secondary characters to support the main story and optional missions. 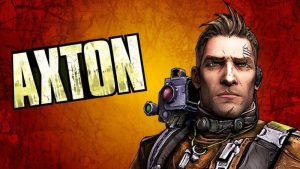 Axton is the Commando class in Borderlands 2.
He has 3 main skills: Guerrilla, Gunpowder, and Survival, but his Action skill is Sabre Turret.
Sabre Turre is an automated weapons platform that can distinguish friend from foe and dominate a small area of any battlefield.
This unique weapon takes 3 seconds to deploy with a base duration of 20 seconds and has a base cooldown time of 42 seconds.
It can be equipped with ammunition belts, rocket pods, a targeting laser, an extra gun, a shield emitter, and mag-lock bases.

Guerilla
The Guerrilla tree focuses on getting Axton into the fight and improves the Sabre Turrets’ ability to perform continuous high damage attacks.
Tier 1
Sentry – Increases the number of shots your Sabre Turret fires in each burst, as well as your Sabre Turret’s Duration.
Ready – Increases Reload Speed
Tier 6
Double Up – Adds a second gun to your Sabre Turret and changes both guns to fire slag rounds. Slagged enemies take additional damage from all non-slag attacks.

Gunpowder
The Gunpowder tree focuses more heavily on medium-range explosives and weapon damage.
Improves many of Axton’s offensive combat stats, and improves the turret mostly as a tactical deploy/distraction.
The 6 tiers go from Increasing Gun Damage and Melee Damage to Deploying your Sabre Turret sets off a small Nuclear Blast.

Survival
The Survival tree focuses on defensive stat boosts and abilities, using the turret frequently, and pulling Axton back from the brink of death.
Tier1
can add+6% Maximum Health per level or Preparation +3% shield capacity per level
Tier 6
Gemini – allows you to deploy two Sabre Turrets. 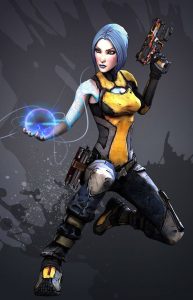 Maya is a playable Siren class character in Borderlands 2.
Maya’s action skill is Phaselock which gives her the ability to suspend foes in another dimension.
This ability preventing the desired target from fighting back for a short time, Some enemies cannot be Phaselocked and instead instantly take damage.
The skill is useful for crowd control in both co-op and single-player modes.
The Base cooldown is 13 seconds while each level in the Quicken skill increases the cooldown rate by 6%, reducing the cooldown to 10 seconds at level 5.
Enemies that cannot be Phaselocked but may take a large amount of damage instead are:
Converge, Helios, and Ruin will still take effect, while Suspension, Sub-Sequence, Thoughtlock, Sweet Release, Elated, and Chain Reaction does not.

Motion
The Motion tree focuses on crowd control, defense-based skills and allowing her to brainwash enemies into fighting each other.
Tier 1
Ward +5% Shield Capacity and 8% Shield Recharge Delay per level
Accelerate – +3% Gun Damage and +4% Bullet Speed per level.
Tier 6
Thoughtlock – Phaselock causes enemies to switch allegiance and fight amongst themselves.
Additionally, Phaselock’s duration and cooldown are increased (3s and 4s respectively).

Harmony
The Harmony tree focuses on healing abilities on herself and her teammates while providing some benefits to Maya’s DPS.
Tier 1
Mind’s Eye – Increases Critical Hit and Melee Damage per level
Sweet Release – Killing an enemy who is currently Phaselocked creates 1 Life Orb per level which automatically seeks out and heals the player and allies.
Tier 6
Scorn – Melee Override. Press [melee] to throw an Orb of Slag that constantly damages enemies near it. 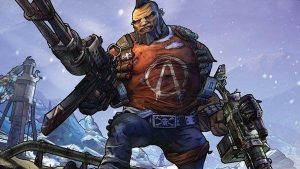 Salvador is the Gunzerker class character in Borderlands 2.
His main skill Gunzerking, allows him to dual-wield any two weapons in the game for a limited time.
The base cooldown for Gunzerking is 42 seconds, the base duration is 20.

Tier 6
No Kill Like Overkill: Grants a damage buff to Salvador’s next shot equal to the excess damage dealt with the enemy just killed.

Rampage
The Rampage tree focuses on extra ammunition and Gunzerking.
Tier 1
Inconceivable: Gives a chance that shots fired do not consume ammo, this chance increases the lower health and shields are.
Filled to the Brim: increases magazine size of all gun types, in addition to increasing the ammo carrying capacity of all gun types.

Tier 6
Keep Firing…: While Gunzerking gain up to 85% fire rate and 25% reload speed as long as the trigger is held down.

Tier 6
Come At Me Bro – While Gunzerking, the player can taunt enemies to attack them while instantly regaining full health and massive damage reduction for a few seconds 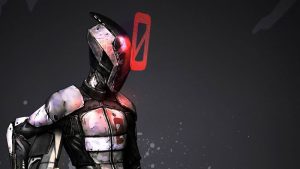 Zer0 is the playable Assassin class character in Borderlands 2.
He is an assassin for hire, his “Decepti0n” grants him the ability to deploy a holographic decoy of himself and enter an invisible “stealth mode.”
While cloaked, Zer0 can inflict more damage on his enemies.
however, the shorter Zer0 stays cloaked, the sooner he is able to use the skill again.
Decepti0n has a base cooldown of 15 seconds and gives up to +650% Melee Damage or +200% Gun Damage and +250% Gun Critical Hit Damage.

Sniping
The Sniping tree focuses on guns, particularly sniper rifles, as well as critical hits.
Tier 1
Headsh0t – Increases Critical Hit Damage.
0ptics – Increases your Zoom with all gun types. Additionally, your aim is not disrupted as much when taking damage.

Tier 6
Critical Ascensi0n – Scoring a Critical Hit with a Sniper Rifle increases your Gun Damage and Critical Hit Damage with Sniper Rifles. This effect can stack up to 999 times. Stacks slowly decay if you haven’t scored a critical hit in awhile.

Cunning
The Cunning tree focuses on improving Decepti0n, and abilities that benefit both ranged and melee combat.
Tier 1
Fast Hands – Increases Reload Speed and Weapon Swap Speed.
C0unter Strike – After getting hit, your next melee attack has a chance to deal massively increased damage.

Tier 6
Death Bl0ss0m – Action Skill Augment.
Press F while Decepti0n is active to throw a handful of kunai. Each kunai will explode with a random elemental type. Kunai does not benefit from the Decepti0n damage bonuses, but throwing kunai does not end Decepti0n and can apply Death Mark.

Tier 6
Many Must Fall – Killing an enemy with a melee attack while Decepti0n is active causes you to deploy another holographic decoy, re-stealth, and adds time to Decepti0n’s duration. This can be done multiple times in succession. 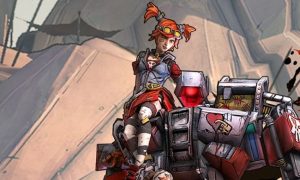 Gaige is the Mechromancer class in Borderlands 2 which was added as post-release downloadable content released on October 9, 2012.
She is able to spawn a mech onto the battlefield to help you crush your enemies.
Deathtrap stays on the battlefield for 60 seconds and has a 60-second base cooldown.

Tier 1
Close Enough – Your bullets that hit walls or other objects have a chance per level to ricochet toward a nearby enemy for reduced damage.
Cooking Up Trouble – While your gun’s magazine is full you regenerate health

Tier 6
Sharing is Caring – Grants a copy of your shield to Deathtrap.

Little Big Trouble
The Little Big Trouble tree focuses on elemental effects and damage, favoring Shock damage out of the four elements available. It also adds some elemental power to Deathtrap, in the form of high-powered heat-beams, shock blasts, and, later on, even the ability to mimic the element of any weapon Gaige shoots him with.

Tier 6
Make it Sparkle – Shooting Deathtrap with an elemental weapon charges him with that element, causing his melee attacks to deal additional damage of that element.

Tier 1
Smaller, Lighter, Faster – Increases your reload speed but decreases your magazine size.
Anarchy – Killing an enemy or fully emptying your gun’s magazine while in combat grants you a stack of Anarchy

Tier 6
With Claws – Melee Override Skill.
While you have a stack of Anarchy, melee to distract claws and swipe twice at an enemy, dealing damage based on the number of Anarchy stacks you currently have and restoring health.
The lower your health the more health you gain. This attack consumes an Anarchy stack. 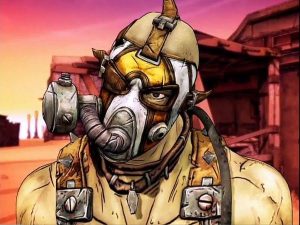 Krieg is the playable Psycho class character in Borderlands 2.
He was released on the DLC of May 14th, 2013.
He is able to transform into a psychotic killer and his main Action skill is Buzz Axe Rampage.
Armed with the Axe, Krieg puts away his currently equipped weapon and takes out his buzz axe, gaining massively increased melee damage and increased movement speed.
Each time he kills an enemy, he fully regenerates his health.
By holding the aim button, he takes aim with his buzz axe, firing causes him to throw it with a parabolic trajectory.
Being damaged decreases Buzz Axe Rampage’s cooldown, but taking damage to shields is less effective than to his health.
It has a Base duration of 16 seconds and Max base cooldown of 120 seconds,500% melee damage, 300% melee damage when thrown.

Bloodlust
The Bloodlust tree focuses on ranged combat and getting Bloodlust Stacks to improve his skills.

Tier 6
Bloodsplosion – Killing an enemy causes them to explode with an elemental nova matching the element that killed them. Nonelemental damage causes an explosive nova. Damage is based on the amount of Bloodlust stacks.

Tier 1
Empty the Rage – Increases melee damage; further increases melee damage when the shield is depleted or magazine is empty,
Pull the Pin – Drop a free grenade upon death. Kills with this grenade are worth double experience, and are announced by a popup once Krieg has respawned.
Feed the Meat – Increases max health and shield recharge delay.

Hellborn
The Hellborn tree focuses on elemental effects, particularly setting oneself on fire.

Tier 6
Raving Retribution – While on fire, taking damage from enemies will spawn homing balls of fire that seek out attacker and explode.

Lucas spends most of his time playing games and watching TV series. What he likes most are strategy games and writing "how-to" gaming guides. When he is not near his mobile device you can find him playing on his classic guitar and drinking beer with friends.
You might also like
borderlands2