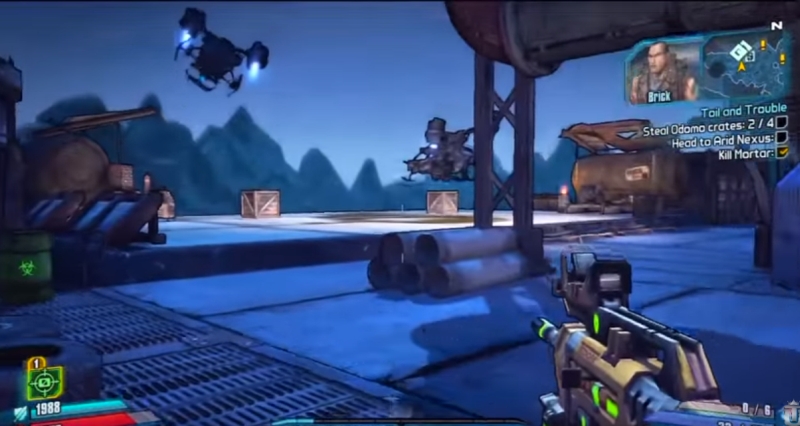 Toil and Trouble is a story mission in Borderlands 2 that occurs in the Sanctuary.
The mission is given by Mordecai and takes over these places Sanctuary ,The Dust, Eridium Blight and Sawtooth Cauldron.
Rewards at level 25 are 8574 XP and 4 Eridium.

Mordecai tells you that Jack killed Roland and Bloodwing, but you can stop him from killing Lilith.
To find Jack you need to find where the Warrior is buried because jack needs time to charge his vault key.
The best place to find this information is the Hyperion Info Stockade at Pandora.

Go to Eridium Blight
Handsome Jack will speak about his daughter murdered by Vault Hunter and wants to revenge before you.
Reaching to Eridium Blight Mordecai welcomes you and mission objective update to Head to Arid Nexus.
Discovering the Bruiseboulder quarry, Hyperion will lock the way to Stockade and you fall down the bridge.
Mordecai will ask Brick for a plan to get in and he’ll suggest to blow up the bridge with explosives.

Find Sawtooth Cauldron
You need to find where the Sawtooth keeps their bombs, but the place is full of unfriendly bandits.
New Mission objectives: Enter Smoking Guanno Grotto, Ascend Inferno Tower
As you find Smoking Guanno Grotto, Brick will tell you to take the elevator and to steal some Y-94 Odomo charges
to get pass the Stockade.
Calling the elevator, Mortar, the Sawtooth leader will ambush you.

Enter Main Street Reservoir, Enter Cramfist’s Foundry,
The elevator is not moving and you need to make Mortar to take it down.
Moving in the Cramfist’s Foundry through a reservoir you’ll need to pass threshers and hostiles as well.

Destroy buzzards: 0/5
You need to clear the flying buzzards to allow Brick’s guys to come and pick the Odomo charges.

Steal Odomo crates: 0/4
You mark the charges crates to be picked by friendly lab Support Buzzards for bombarding the bridge.
Brick’s advice for you is to jump off the east end of the tower to get back to fast travel station.

Head to Arid Nexus
After Brick’s buzzards bombard the bridge, the way to the Info Stockade is open and the
The mission is turned in at the Arid Nexus – Boneyard Catch-A-Ride.

Lucas spends most of his time playing games and watching TV series. What he likes most are strategy games and writing "how-to" gaming guides. When he is not near his mobile device you can find him playing on his classic guitar and drinking beer with friends.
You might also like
borderlands2WALKTHROUGH