Sands of Inaros is an optional Quest in Warframe introduced in Update 18.5.
The reward for completing this quest is the Inaros Warframe.

To unlock this quest you must purchase the quest blueprint from Baro Ki’Teer also known as the Void Trader.
You are able to find Baro Ki’Teer in the Concourse section of the Tenno Relays.
The payment will be in Orokin Ducats which can be acquired by selling Prime blueprints, weapon parts or
crafted Warframe components at one of the Ducat Kiosks in the Relays

The problem with the Void Trader is he only shows up once in two weeks for a period of 48 hours.
You can observe the trading window time on a countdown timer on his Void Trader Kiosks showing the time left
for his arrival and then when he appears, the time left for his departure.

Read the Notes for other ways on how to get inaros.

Sands of Inaros blueprint price is 200 Ducats and 50,000 credits and requires mastery rank 5.
To construct the blueprint in the Foundry (under the Keys section) you need these: 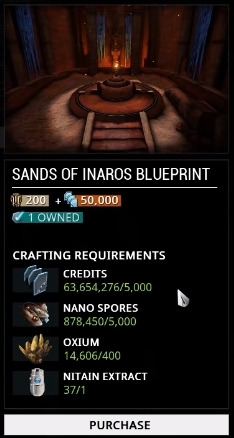 The time for manufacturing is 6 hours and then you’ll be able to unlock the quest from your codex.

Baro has an opportunity for you, he wants a valuable relics left behind in a hidden tomb on a forsaken rock call Phobos.
This is level 20-25 mission, which takes place in a Desert Tomb at Phobos, Opik.
You start the mission arriving at the temple where Baro will tell you to ignore these ‘Inaros’ glyphs, “nothing but nonsense about their so called god-king”.
At the place where the big statue is, a female voice will tell “shake out the sand, but remember ,not all of it…and i’ll tell you the story”
She will talk about the ‘Golden Skymen‘ (Orokin ) who abduct people of all ages the most beloved ones until the arrival of ‘the skykiller’ Inaros.

To find the Sacred Vessel go to the end of the temple until you find a large jar lies at the feet of a shrine.
Baro will ask you to return the Vessel for further examination.
The first mini-mission is complete now and the reward is the Inaros blueprint.
You will need to equip the Vessel in your player’s Gear inventory and to fulfill the Vessel inscription.

There can be a different glyph types for each player which gives a different enemy type which can be one of three:
• Detron Crewman
• Seeker
• Volatile Runner
See the pictures for different enemy glyphs and the regions where to find them. 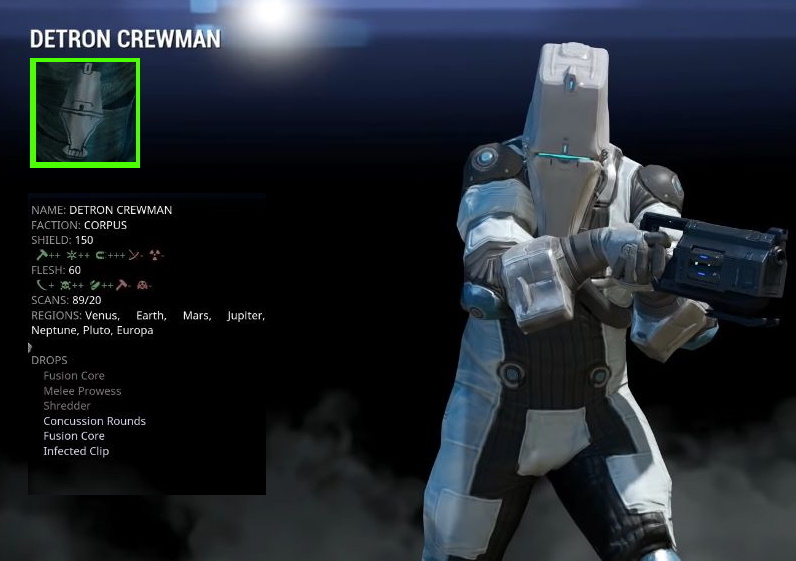 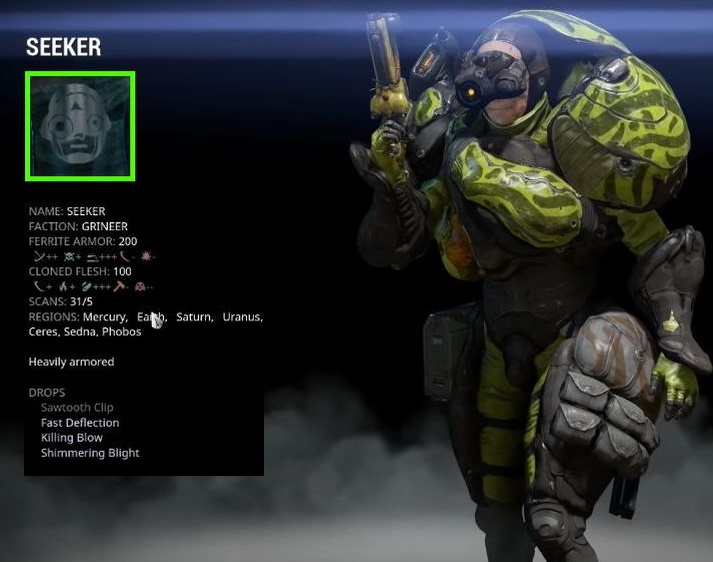 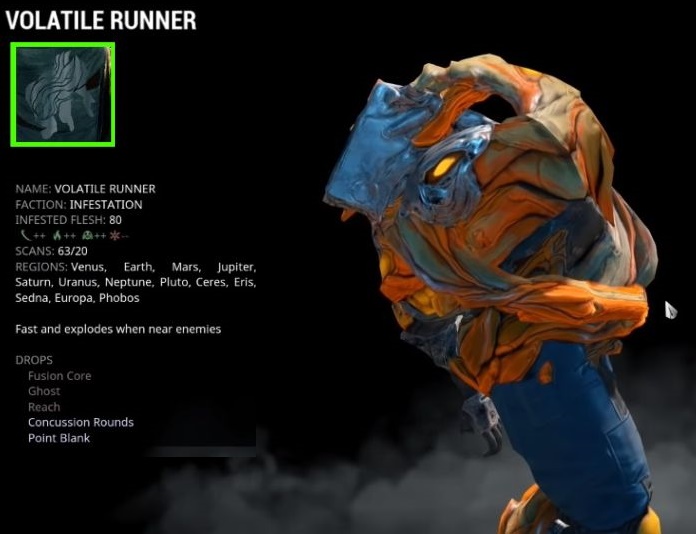 As Tenno kills the correct enemy type, he will see sparks around his character and the status bar on the vessel will update to show how many enemies left to kill.

Reaching the required number of 60 enemies, Baro Ki’Teer will tell the Tenno to return to their ship and to further examine the vessel.
You’ll now see the vessel’s glyph is glowing.

Go back to the temple and when arriving at the big statue,  Baro will ask you to take the vessel to a door.
Place the Sacred Vessel near the door to open it and you will find in the center of the room inside, another second Sacred Vessel that you should take.
As you pick the Vessel, a voice will speak about Inaros the Golden Skymen and as the story ends a large pack of Feral Kavats will attack.
You need to kill all the Kavats, and than Baro will ask the Tenno to return to the ship.
This challenge reward will be the protector helmet blueprint.

Baro will ask you now to complete another challenge and to return to the tomb.
Similar to the previous challenge, you need to take the Sacred Vessel and equip it in your inventory,
and then to kill 20 of the following enemy according to the glyph:
• Railgun MOA
• Hyekka Master
• Brood Mother 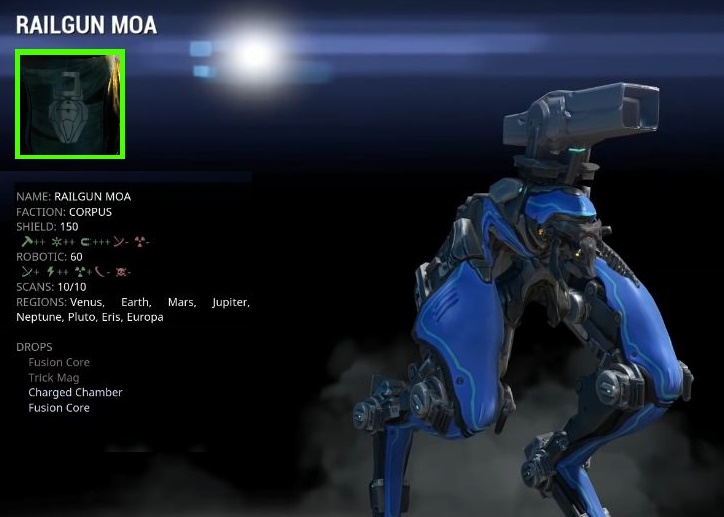 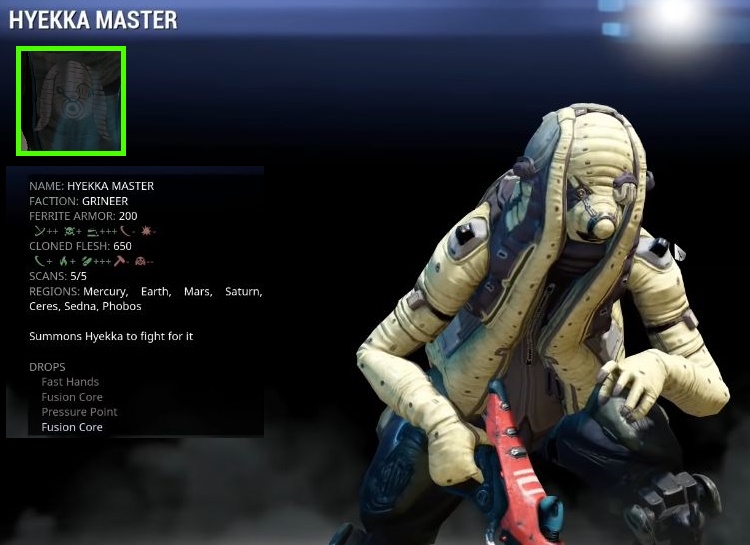 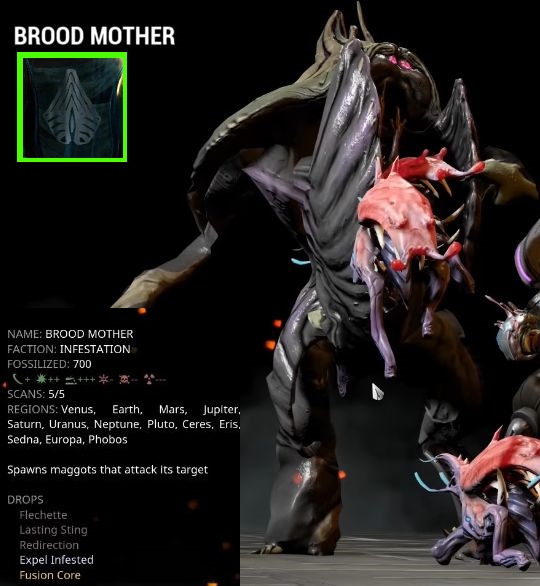 After the challenge is completed Baro will ask you to go back and to return the vessel.
He will also seek the feminine voice and will say “So where is she ? that voice? I think I need to hear to rest…”
The same motive repeats, you need to find the door and place the vessel, to open the door and collect the third Vessel.
You will hear the feminine voice telling the rest of the story about Inaros and as she ends Bro will tell you to get ready.

At the shrine on the other room, you will see a gigantic Tomb Guardian and after killing him once, he will return in smaller versions of itself.
Killing the new ones they will spawn into smaller and smaller copies of themselves until you finally destroy them all.
This will occur 3 or 4 times until they are completely eliminated, the voice will talk again and Baro will ask you to return.
This challenge reward will be Inaros Chassis Blueprint.

Baro will ask you to complete the 3’rd challenge.
Once again it can be one of 3 possible enemies shown on the glyph:
• Denial Bursa
• Grineer Manic
• Juggernaut 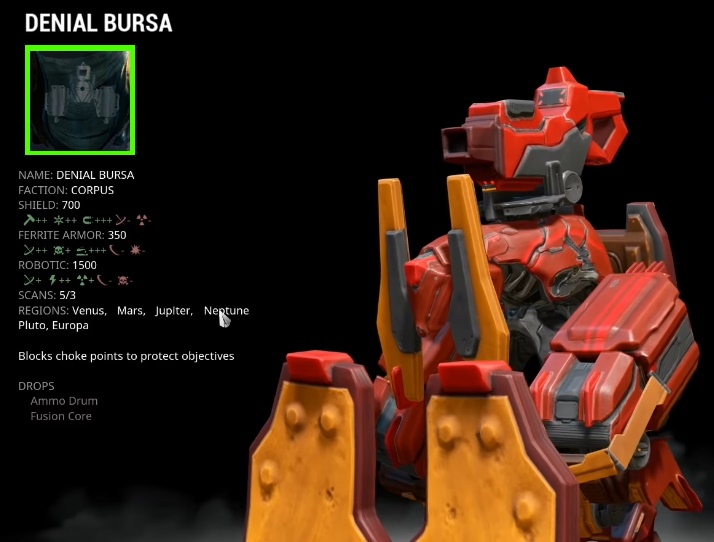 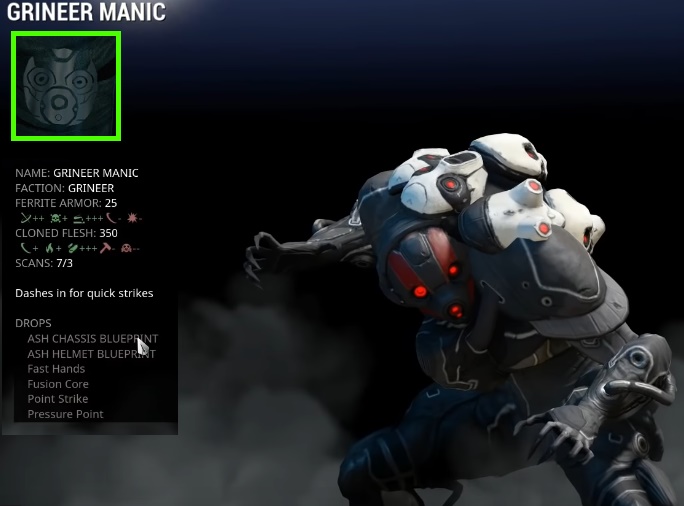 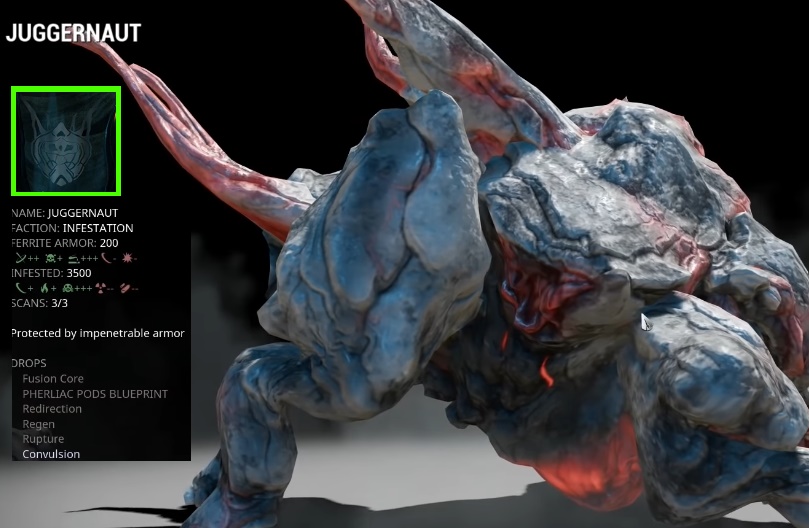 Go back to the temple and place the vessel by the door to open it and collect the last vessel.
You’ll need to prove yourself against the Tomb Protector which is actually a copy of Inaros warframe that can’t be seen on the map.
Sometime the Protector will retreat to its sarcophagus and instead you need to fight one of the statues in the room that is now brought to life.
Defeating a statue will make the Tomb Protector rise and fight, killing all the four statues you’ll be able to defeat the tomb Protector.

Note: The final fight with the Tomb Protector is timed, you have nearly fifteen minutes to complete the fight before extracting.
A failure to do so will result in an overall mission failure.

After the battle, Baro reveals that the feminine voice was his mother and he is the child being spoken.
Completing the quest will reward the final component for the Inaros warframe, the protector systems blueprint. 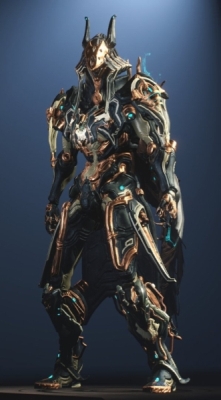 Here are the components required to craft each of the system parts.

Well, the quest is long and not easy but gives a lot of satisfaction once completed.

•  Having the Sacred Vessel equipped in your inventory while killing enemies is not enough, you must select the quest as your active one.
•  You can do the quest only once with no option to repeat! so, the only way to get the Inaros Warframe after selling it will be to buy it on the market.
•  If you don’t want to purchase the quest from Baro Ki’Teer, you can buy The Sands of Inaros Bundle from the market for
795 Platinum instated of buying each item separately at a total cost of 1005 Platinum.

If buying then no mastery rank is required for any of the above items or Sands of Inaros quest.

Bonus- Weapons that heal to use with Inaros

Inaros is a great Warframe to play with and a very strong one but it has only health with zero shield.
Unlike shield that regenerate after three seconds of not taking damage, health is not.
So there are few alternatives on how to get more health.
You can use mods like Physique, an aura mod that increases maximum health by 90% (max) to create a very big health pool, but better will be to generate health.
Some of the weapons like Hirudo are very good to use with Inaros because they will turn his Warframe into almost invincible even when facing high level enemies.

The Hema is a bloodsucker rifle, mastery rank 7 primary weapon that leeches health to forge ammo and to restore health with each headshot.
It is a burst firing weapon that uses health to reload its magazine and will get 10% of your warframe’s health pool as healing in return on a headshot!

It has a critical change of 11% and status of 25%.
The blueprint can be research in the clan dojo Bio lab or purchased for 225 platinum from the market.

The Hirudo are Infested sparring weapons which can steal health from enemies on critical hits.
Every successful critical hit with the Hirudo will return 5% of damage dealt to the enemy as health to the player and each successful critical hit also increases the player’s max health by 5%, this can stack up to 5 times, for a maximum of 25% additional health bonus.
It has a critical change of 30% and status of 11%.
The Hirudo blueprint can be purchased from the market for 15,000 credits but it requires a Kogage as an ingredient for building.

Both the Hema and Hirudo are part of the bundle Nidus collection that costs 660 platinum.

Maybe not a direct healing, but still worth mentioning is the Broken Scepter signature staff melee weapon.
It has a special ability that allows the player to ‘drain’ deceased enemies to gain health or energy orbs.

When standing over an enemy corpse while wielding the Broken Scepter, the player gains the ability to drain the corpse and to generate a health orb from an organic enemies while robotic enemies (such as MOAs) will release energy Orbs instead.

It comes with a critical change of 10% and status of 30%.
This weapon is given on completion of The War Within and Additional blueprints can be bought from Cephalon Simaris for 100,000 standing.

When Hunter was a little boy his brother used to play Half-Life and the rest is history. from there Hunter starts playing with the best shooting games for PC. These days he likes not only playing FPS (first-person shooters) but exploring a variety of other Games while writing about his impressions and experience.
You might also like
WarframeWarframe QuestGAMESWALKTHROUGH