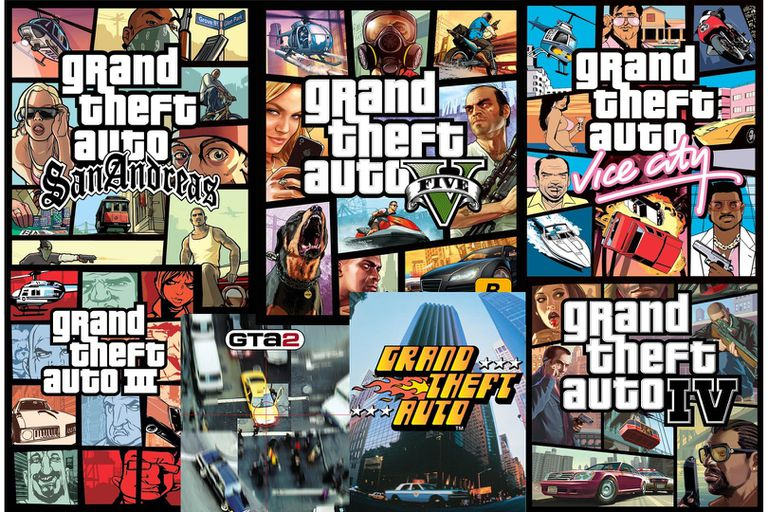 What is Grand Theft Auto

There are currently sixteen games in the series, plus two expansion packs for the original and two expansions for GTA IV and including a multiplayer title. The games have been released for various platforms, including the PC, PSX, PS2, Xbox, PS3, Xbox 360, PS4, Xbox One, GBC, DC, GBA, PSP, DS, iPhone and Android with all but two of the games released on multiple platforms.

Most games in the series are taken place in fictional locations on cities, like Liberty City, Vice City or San Andreas, which are stand-ins for New York City, Miami and the state of California.

The third chronological title, Grand Theft Auto III, is considered a landmark title, as it brought the series to a 3D setting and more immersive experience. Subsequent titles have followed and built upon the concept established in Grand Theft Auto III, and received significant acclaim. They have influenced other open-world action games and led to the label Grand Theft Auto clone on similar games. Notable games that are comparable to Grand Theft Auto are Saints Row, Scarface: The World Is Yours,True Crime: Streets of LA, Watch Dogs, Sleeping Dogs, Just Cause, Mafia and The Godfather.

The games allow the player to take on the role of a criminal in a big city, typically an individual who rises through the ranks of organised crime through the course of the game. Various missions are set for completion by the figureheads of the city underworld, generally criminal, which must be completed to progress through the storyline. Assassinations, and other crimes feature regularly, but occasionally taxi driving, firefighting, pimping, street racing, or learning to fly fixed-wing aircraft are also involved as alternate adventures, which can be done at any time during the game, with the exception of the periods performing main missions.

The Grand Theft Auto series, belonging to a genre of free-roaming video games called “sandbox games,” grants a large amount of freedom to the player in deciding what to do and how to do it through multiple methods of transport and weapons. Unlike most traditional action games, which are structured as a single track series of levels with linear gameplay, in GTA the player can determine the missions they want to undertake, and their relationships with various characters are changed based on these choices.

The cities of the games can also be roamed freely at any point in the game, offering many accessible buildings and minor missions. There are exceptions: missions follow a linear, overarching plot, and some city areas must be unlocked over the course of the game. Although you can explore the entire city or state even if it is locked (but there are limited time to explore some city because some may trigger a 4-wanted level or 6-wanted level) and ignore the missions.

Mod – is short for modification.
Game Mods are created by players or fans of a video game.
Installing them in the game are changing the gameplay by adding new features or changing the appearance of the game.
In this section of the website, you can download a lot of mods for GTA 4.

GAMES
About the Author
Hunter

When Hunter was a little boy his brother used to play Half-Life and the rest is history. from there Hunter starts playing with the best shooting games for PC. These days he likes not only playing FPS (first-person shooters) but exploring a variety of other Games while writing about his impressions and experience.
You might also like
GAMES

by Dylan on April 15, 2020
Intro Mask of the Revenant is an optional Warframe quest on the issue of a decorative mask for the Operator. The mask story is about the tale of a Warframe left behind to prevent the return of the Sentient Eidolon (enemies of the Orokin during the Old War).Once completed the quest reward is a blueprint […]

by Dylan on April 7, 2020
Natah quest Natah is a main Warframe quest involving the mystery behind a strange drone appeared in the Origin System and the Tenno mission is to help The Lotus find out what they are and who sent them. Requirement: Mastery Rank 3 Unlock the uranus junction Scan drones in Grineer Sealab on Uranus Rewards Exilus […]

by Ankit on March 22, 2020
Introduction of The Limbo Theorem The Limbo Theorem serves as an optional “Lore Quest,” landed with the releases of Update 15.0. In this quest, players are required to piece together the meaning found behind the strange theorem. Completion of the quest is a bit tricky, and sometimes you stuck somewhere and found no solution to […]

by Dylan on February 11, 2020
Introduction Warframe platinum is the main currency that enables you to buy almost everything in the game. A partial list of what you can buy with platinum (plt) are Weapons, Warframes, Blueprints, Mods, Resources, boosters, slots, prime parts, weapon parts from syndicates, unranked weapons from the Void trader, Arcanes, cosmetics, rushing foundry items and much […]

by Dylan on January 16, 2020
Intro This is the first post on how to farm any warframe. It has all the non-prime versions of Warframes and how to get them. In this post, we’ll refer to the regular changes for obtaining the Chassis,Neuroptics and Systems Blueprint as in this table : Component Chance Chassis Blueprint 38.72% Neuroptics Blueprint 38.72% Systems […]

by Dylan on December 31, 2019
What is Specter and why to use one A Specter is actually a computer ally that will fight next to you duration the mission. The Specter will follow you (unless you told him to Hold Position while pressing x), fire at enemy targets and assist you while doing the mission. After you manufactured and equipped […]