What is Specter and why to use one

A Specter is actually a computer ally that will fight next to you duration the mission.
The Specter will follow you (unless you told him to Hold Position while pressing x), fire at enemy targets and assist you
while doing the mission.

After you manufactured and equipped it in your gear, you’ll be able to summon the Specter during the mission.
It will be available for all Missions except for Archwing and cephalon simaris Sanctuary Onslaught.

When playing solo, I like to use specters especially in defense, survival or heavy resistance missions where a second hand is greatly helpfully.
And Because Specters are easy to farm and manufacture yon can use them whenever you get into trouble and need help.
Please note that the post refers only to alley Specter but there are enemies and Solar Rail Junctions Specters as well.

Where to find Warframe specter blueprint 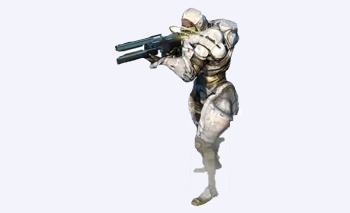 Tenno Specter blueprints are acquired by completing Rescue missions depends on the mission level and the gained rescue points.
You can get up to 3 rescue points as follow:

There are four levels of Tenno Specters: Vapor, Phase, Force, Cosmic based on the mission level.

One of the easiest way to get a Specter is to go to Earth, Pacific it’s a Grineer level 3-6 mission that you can do very fast and get a Vapor by just killing the guards.
Getting a phase Specter from this mission is not that hard and you can also use Ivara Prowl’s ability to become invisible.

Vapor Specter blueprint is rewarded from Easy and Medium difficulty Rescue missions and yields 10 Specter per build.
The Specter level is the same as the starting level enemies in the current mission.

Phase Specter blueprint is rewarded from Easy, Medium and Hard difficulty Rescue missions and yields 5 Specter per build.
The Specter level is the starting level of the enemies in the current mission + 3 levels.

Phase Specter blueprint is rewarded from Medium, Hard and Nightmare difficulty Rescue missions and yields 3 Specter per build.
The Specter level is the starting level of the enemies in the current mission + 5 levels.

Cosmic Specter blueprint is rewarded from Hard and Nightmare difficulty Rescue missions and yields a single Specter per build.
The Specter level is the starting level of the enemies in the current mission + 10 levels.

In the Foundry, the Specter crafting starts by copying the player’s current loadout without any installed mods or appearance.
Each specter level will have its own template loadout derived from the player’s current Warframe and weapon loadout in the Arsenal.
You can select another Warframe or weapons to copy to the specter loadout template, but It will have the base unranked statistics of the
Warframe and weapon and will scale according to Specter’s level.
When the crafting ends and the specter is ready, the player must equip them in his Gear from the Arsenal.

The manufacturing requirements for the 10 x Vapor specter are quite low: 15k credits, 7.5k salvage, and 5k ferrite.
But for the next levels, you’ll need other components as 1k plastids and 5k Nano spores which can be hard to get for new players.
Personally, I like the Vapor specter as it does a good job and fits for most low-medium missions.

What Warframe Specter loadout is the best?

Most Syndicates offer Specters at their first rank at a cost of 2.5k standing for a bundle of 5.

Most of the Syndicates Specters are not so strong and effective as the Tenno specter.
In my opinion, MOA ,Corrupted Lancer and Roller are waste of credits, I prefer using
Shield Osprey for regenerating me and my alley Shields and it can last longer depends on the enemies.
The Charger can also be good for some low-level missions but it mostly not last very long.
Ancient Healer has a nice feature of around 15m aura that reduces damage by 90% for all friendly targets. 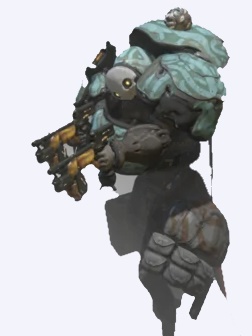 Completing the “A Man of Few Words quest “ rewards in Clem Clone Blueprint which is actually a specter of Clem.
After completing the quest you can also do the “help Clem weekly mission” once a week (resetting every Monday) and get more of Clem clone Blueprints.
For doing the clem weekly mission, Go to Darvo (in the Relay, you can use Fast travel) and ask to help.
Darvo will send you to a 10-minute survival mission with Clem, this is very similar to the final mission of the quest but in a random survival location. 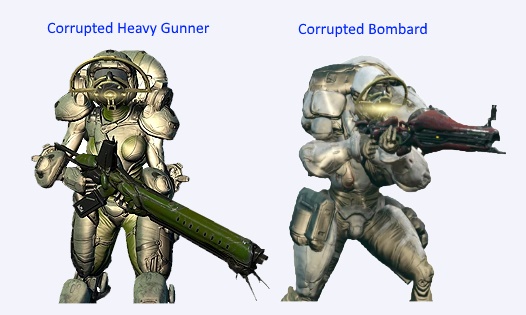 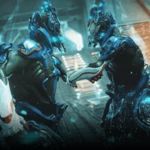 Wukong first ability,Celestial Twin, creates a twin specter of Wukong himself.
The twin will use the same weapons that Wukong has and will cycle weapons to be different ones than Wukong when he changes them(primary/secondary/melee).
One big advantage is that mods do count for this specter and it has twice the health and shield that Wukong has.

I really like playing the new Wukong with the twin specter and I already used it in a few missions, one particular mission type it was helpful is solo hijack .
If you summon Tenno specter + Celestial Twin + Shield Osprey than you have your small little army for solo missions. 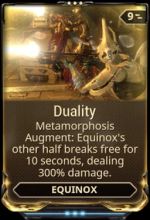 Equinox has the Duality augment mod that causes her opposite form to split from her when casting Metamorphosis.
The augment will create a Specter armed with the weapon Equinox was using during casting.
The Warframe and equipment stats plus mods are taken into account without the Warframe abilities and it can deal up to 300% damage for 10 seconds.
The duration of the specter is affected by the Ability Duration but it will not last very much as other specters do.