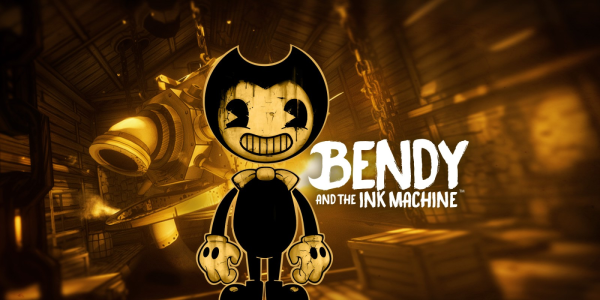 Bendy and the Ink Machine also know as BATIM or simply Bendy is an episodic survival horror video game categorized as first-person puzzle action survival.
The game revolves around Henry, a retired animator that gets an invitation from his old employer Joey Drew.
Joey asks him to visit the old workshop because “there’s something I need to show you”.
While Henry visits his old studio “Joey Drew Studios”, he discovers a nightmare of cartoon characters brought to life by the Ink Machine.
Playing the game involves solving puzzles, exploring the environment and fighting to help Henry on his journey through Joey Drew Studios.

Bendy and the Ink Machine Chapter 1 Walkthrough
The chapter starts with Henry entering the studio.
Tip: there are hides along the way with cans of Bacon Soup, consuming one can of Bacon Soup will completely restore Henry’s health.

Turn On the Ink Machine

The tip is to locate the power station.
On the way out, go back to the gate that was closed before.
Walk until you eventually find a room which is the ink machine main power also called the “break room”.

These objects are scattered throughout specified locations on the map.
Here are the locations of the missing objects:

When you have all the items, place each on its specific pedestal location in the main power room.

Turn on the Ink Machine

Go back to the main power room and pull the switch.
The machine is now running.

Head back to the Ink Machine room, it’s blocked now with planks.
Near the blocked entrance, Henry hears a shout and will encounter Ink Bendy for the first time.

After encountering Ink Bendy at the Ink Machine, the whole place will start filling with Ink from all around.
Henry should run towards the exit and then will fall through the floor, landing in a secret room.

Tip: find and return the valves.
The room Henry lands into is flooded with ink, and has to be drained by turning a pipe valve.
One the way out, there will be two more valves that can easily be spotted.
Turning these valves will drain the ink from the flooded areas.

Tip: An Axe may come in handy
Go down from the basement and you’ll see an axe laying on a table.
Pick it up and use it to break the wooden planks blocking the path to another room.

There will be more boards blocking the way, break them as well and you should find the Ritual Room.

Suddenly Henry will experience a few quick flashbacks of the Ink Machine, a wheelchair, and Ink Bendy before fainting on
The ritual symbol painted on the floor.
The first chapter is now complete.

Dylan has a passion for PC games of all kinds since he was a kid. He spends hours exploring and diving into the fascinating world of gaming. When he is not playing, he likes traveling and working on his retro motors collection.
You might also like
Bendy and the Ink MachineGAMESSERIESWALKTHROUGH

by Dylan on October 17, 2019
Bendy I can surely say that Bendy is a fun and popular video game, but it became even more than just a game. It has fans, toys, items selling stores, songs, cartoons and much more. In this post, we’ll answer some FAQ that people have about Bendy And The Ink Machine. What is bendy and […]