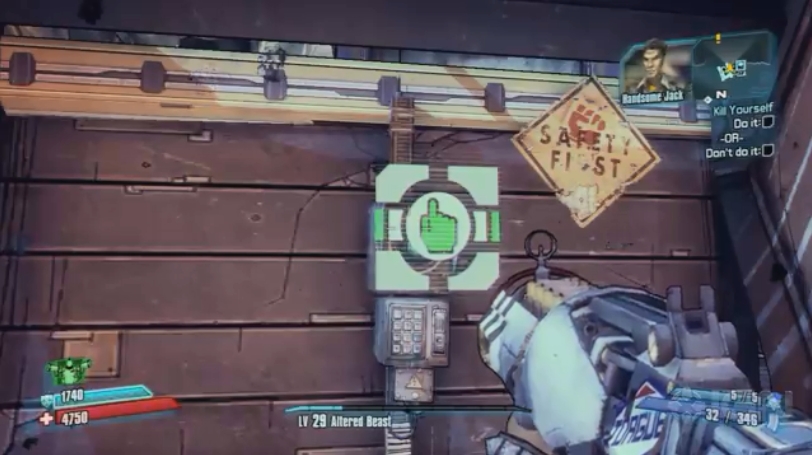 Kill Yourself is an optional mission in Borderlands 2 that takes place in Eridium Blight
The mission is given by Handsome Jack via the Jack Bounty Statue and the rewards at level 29 are
3,715 XP + 12 Eridium or 11,145 XP.

Handsome Jack has a proposition for you, go to Lover’s Leap and get paid if you to kill yourself.
Climbing up the long ladder you’ll see one suicide shouting that “I’m gonna be rich” before he off of the cliff into the lava.
Arriving at the place there is a button to call Hyperion Suicide Prevention Hotline if you use it
it’s equal to “Don’t do it” , the reward is triple XP but no Eridium for that.
If you jump, the reward is 12 Eridium and experience points (XP).
Head back to the Jack Bounty Statue to get the payment

This is a new element in Borderlands 2 with many uses.
You can get Eridium from some bosses drop, playing slot machines around Pandoraor or as a mission reward.
The maximum number of Eridium bars a player can have is limited to 500.
Here are some of the uses:
• For upgrading characters at the Black Market.
• For fighting Terramorphous the Invincible (raid boss),and also the Invincibles: Hyperius,Master Gee ,Pete and Voracidous.
It cost 8 Eridium units to fight each of those Bosses.
• Spawning catheters as Dexiduous the Invincible
• To active shrines, roll dice, to continue in some missions, to upgrade weapons.