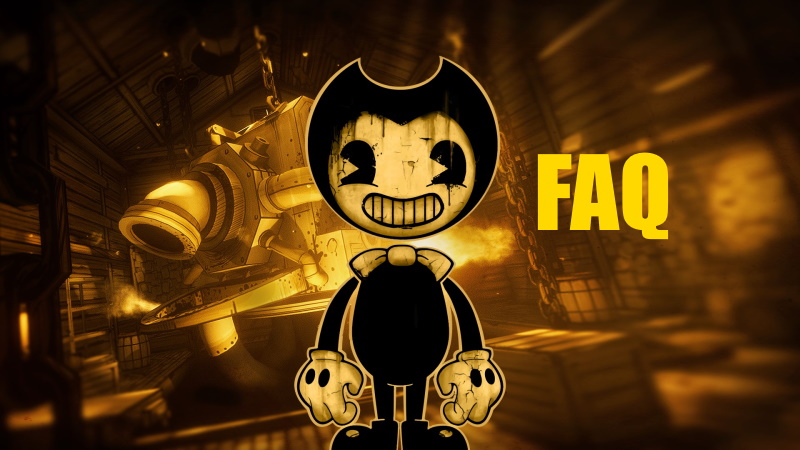 I can surely say that Bendy is a fun and popular video game, but it became even more than just a game.
It has fans, toys, items selling stores, songs, cartoons and much more.
In this post, we’ll answer some FAQ that people have about Bendy And The Ink Machine.

What is bendy and the ink machine?

BATIM also is known as Bendy or bendy and the ink machine is a horror first-person video game made of 5 chapters.
It has objectives and puzzles the player needs to solve moving to the next objective.
You play Henry Stein a retired animator and the main character of the game on his journey through Joey Drew Studios.
Henry’s old friend, Joey, send him an invention to check what is going on in the old studio they used to work.
Arriving at the studio, the building is in disrepair and Joey is missing.
You need to find what happened revealing the truth and stop the Ink creature that becomes part of the studio.

The game has limited physical activity and different melee-based weapons, but don’t expect too much fighting.
The idea is to solve the riddle and to dismiss the mystery around Bendy.
Almost in every part of the game, there are audio logs where the workers of the studio talk about what they do.
This gives clues on how to proceed, to find secret areas and to give additional information about the game.

When was bendy and the ink machine made

The Initial release for the first chapter of the game was for PC on February 10, 2017, later on October 27, 2018
the full 5 chapters in the series were released too.
A mobile version for iOS and Android was released on December 21, 2018.

Who made bendy and the ink machine

What is the game rating?

Will there be another bendy and the ink machine?

Achievements are unlockable features to unlock by doing strategies in the Bendy game series.
These can be only unlocked while in online mode with an internet connection.
So far, there are around 60 achievements available on PlayStation 4 and Xbox One.
A few examples:

How the game ends?

We don’t want to make spoilers here, but if you want to find what the ending of Bendy
You can read the walkthrough of the concluding chapter 5 ending the series.

How to draw bendy and the ink machine?

This video show how to draw bendy easily.

The game also knowns as Bendy Run or Nightmare Run is a mobile spin-off for Android and iOS that was released in 2018 by kindly Beast and Joey Drew Studios Inc.
The game developed by Karman Interactive and is free to play on Google Play and App Store.
The game takes place on a Bendy cartoon universe with three playable characters are available: Bendy, Boris the Wolf, and Alice Angel.
It has four-level and 4 boss cartoon monsters you need to beat.
Some of the game’s new features are unlockable weapons, bacon soup for purchasing and score rating.

This is a guide book written by Cala Spinner you can find it on  Amazon.
It maps the whole game locations, letters, newspaper excerpts, memos, sound files, etc.
It also shows how to make your own “Bendy and The Ink Machine” cartoons, and how to draw the characters.

Dylan has a passion for PC games of all kinds since he was a kid. He spends hours exploring and diving into the fascinating world of gaming. When he is not playing, he likes traveling and working on his retro motors collection.
You might also like
Bendy and the Ink MachineGAMES