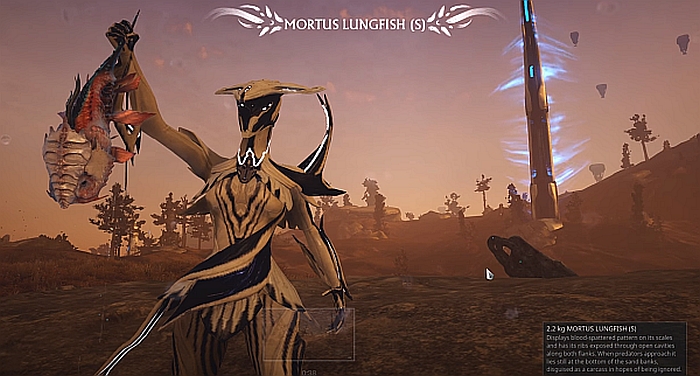 What is Warframe Fishing?

The game provides you with lots of non-combat activities, and fishing is one of them available in several landscapes.
During the gameplay, you’re allowed to catch rare fish and use them as resources for crafting requirements.
Fishing activity was first brought to you by developers in update 22.0. Before embarking on a fishing adventure, the game requires you to collect enough Standing (Resource) with the linked faction of landscape, such as:

Next to that, you become able to purchasing your fishing spear from your suppliers like The Business or Hai Luk because, without proper equipment, we don’t think you can catch any fish. You can purchase Dye and Baits to get further assistance in fishing. Once you bought the fishing spar, it will be added to your inventory, and you can equip it by visiting the Gear Menu. You should know there’s no need to provide all available spears, as all items will be obtainable through the Menu (Fishing) once spear has been prepared.

There are two possible landscapes full of lakes, ponds, and oceans, where you can go for fishing after equipping the fishing spear, such as:

Upon reaching, you have to equip your character with a fishing spear from the Gear Menu.

When will Fishing Menu appear?

The “Fishing Gear Menu” will become available on the bottom-right of your screen as you equipped your character with a fishing spear. The menu will indicate the chosen dyes, bait, and spear as well. Throughout the gameplay, you can alter your selection by utterly holding the following keys, such as 1, 2, 3, and hitting the given key will cast that bait or dye.

How to Catch a Fish?

Catching a fish is a trick, and you should learn first before implementing it. Use your spear to aim and find a catch by capturing its splashing and bubbling sounds. During that, you can follow the sounds to detect your prey and, upon seeing, instantly spear them by utterly hitting the “Fire Button.”

Make use of Luminous Dye

Tip: Discover the names of fishes in conjunction with their splashing or bubbling sound as well. The spear, a throwable projectile, has both the slight ballistic and travel time arc; therefore, you just need to maintain or adjust trajectory depending on your distance from the fish. You need to know about the abilities like Zephyr’s Jet Stream that decreases the travel time of spear. Using Luminous Dye is worth in the game as it illuminates all fish within a specific area with a blue-colored light that will glow to highlight fishes and let you quickly find the best spot to catch fishes.

The successful attempt will display the player’s character holding a catch with statistics based on the species, size, and weight, which will be shown in the infobox. The unsuccessful attempt will create waves in the water that alert the nearby fish and scatter them. You need to know that disturbing the fish several times can make them de-spawning.

Players can’t use any Abilities and Weapons while Fishing

During the fishing, you can’t use any abilities and weapons while fishing. You can use a melee weapon to take on enemies and can throw your spear at enemies; however, it will deal with negligible damage.

Use Shock Spears to catch the Servofish

Servofish is available in the Orb Vallis landscape, and if you intend to catch it, then you should grab some fishing spears from Cetus. Doing exactly as said will damage the fish severely and decrease the value of both Standing Gain and Parts as well. Therefore, we recommend you to use Shock Spears if you intend to catch Servofish safely. You can purchase the Shock Spears using the Solaris Standing from “The Business.” The use of Shock Spears will be the same as the Fishing Spears, and a silver gauge will be displayed once the Servofish has been hocked. It seems a mini-game where you require to time the movement for the given white-colored mark on a land highlighted the red section using the fire button.

Players can redeem the fish they caught either for Standing (Resource) or generic resources. After that, players can use funds to craft valuable items and to unlock premium content. You need to know that Fisher Hai-Luk can handle such offers on Cetus, while the Business can handle the same type of job on Fortuna.

Best Places to Fish on the Orb Vallis

For sure, we successfully make you understand the basics of fishing, now you are probably wondering to know the best places to fish than others. We compiled a list of places where you can successfully catch fish, which means the success rate is relatively good across Orb Vallis. If you have already decided on a place, then you should go fishing over there. Some spots are highlighted in the image shown below that many players have had success with.

Some of the fishes are required hotspots to get spawn, while each species of Servofish has its unique loot from Dismantling.

Specific types of rare fishes are there that can only be lured out of hiding using the unique Bait. As you know that Bait can only attract fish across hotspots in the water. The game represents the hotspots with the circular-shaped white patterns that are continuously fading in and out on the water’s surface. After approaching the targeted places, you required to throw Bait at it. Now, it depends on the type of Bait you are using that how many fish appear in and around the set hotspot. Before using, it essential to know that the effect of Bait will last for 3 minutes, whereas the fish type is likely to spawn.

While playing the game, you have to craft Bait, although some pre-crafted Bait can be purchased from Fisher Hai-Luk on Cetus or from “The Business” on Fortuna. There are pre-crafted Fish Baits available, check them out:

Here are Some Fishing Spears you can purchase on Cetus

You can use “Standing” to purchase fishing spear from the vendor like Hai-Luk on Cetus. The game lets you use all types of fishing spears on a series of fish, while available on the Plains of Eidolon. Each Fishing Spear is much stronger naturally or somehow weaker against specific kinds of fish. The Fishing Spears you purchased on Cetus can be used on the Orb Vallis, but we won’t recommend you because they cause to damage the Servofish, decreasing the value and will reward you for catching fishes.

Some Fishing Spears are the following:

There are two different types of fishes, and their names are the following, such as Baited Fishes and Non-Baited Fishes found in Plains of Eidolon.

You don’t need any Special Bait to lure the following fishes out from the depth of the water, such as:

These are particular species of fish that only can see with the help of a Bait. You would be amazed to know that four of these species are considered rare up to 10 times compared to other fish species.

General Tips for you when fishing in Warframe

Making use of both Pharoma and Luminous Dye in the game quite right for you as lots of your time will be spent waiting for fishes to spawn. As said above, you will listen to the sounds of splashing and bubbles before the appearance of fish. Depending on the surrounding environment, including time, water, and lightning effects, identifying the fish can be a hassle. Therefore, making use of Luminous Dye will light up nearby fish and make them easier to catch. You don’t have any solid reason to save the Dye, as they are cheaper and can be easily crafted.

"A day without playing is wasted day" This is Ankit motto in life. Ankit is not only one of our best Indian gaming bloggers but a great fan of Arcade and Xbox games. He loves to break records on well-known games and to do scuba diving in his spare time.
You might also like
WarframeWarframe collectionWARFRAME