GAMES
192
0
previous article
Little Nightmares Six – A Cute, but Dangerous Protagonist
next article
Warframe Tier List – What is the Best Frame for you to acquire in 2020? 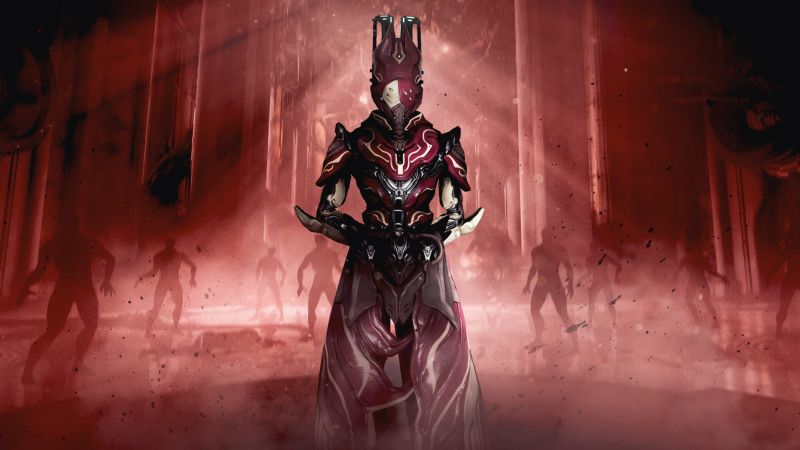 Chains of Harrow is a warframe main quest introduced in Update 21.0.
The quest involves Rell, a lost Tenno and the Red Veil syndicates in an attempt
to remove the mystery around a horror Steel Meridian ship.
The reward for completing this quest is the Harrow Warframe blueprint.

To make the quest available in your Codex, you need to complete The War Within quest and unlocked Mot in the Void (Survival )
Which is accessible via Sedna.

As you set the quest active, Ordis will receive a truncated and encode transmission on the Syndicate channel
Coming From the Red Veil. He will then play the record and you’ll hear some feminine voice
Speaking to someone named Rell asking who he is, but it seems that Rell is very frightened.
Ordis will think the message is hunted but originated from abandoned Steel Meridian ship in Earth orbit.
Now you start playing the game.

You find yourself in a ship working on emergency power without any crew and Lotus asks you to search the area,
the atmosphere is a little bit scary and quite dark.
Tracking the yellow marker on the mini-map leads to a place where you can find dead Grineer bodies, you’ll also will
see the Red Veil symbol in blood on one of the walls, but the last highlighted area will lead to a wall with this message:
“You cast him out”. 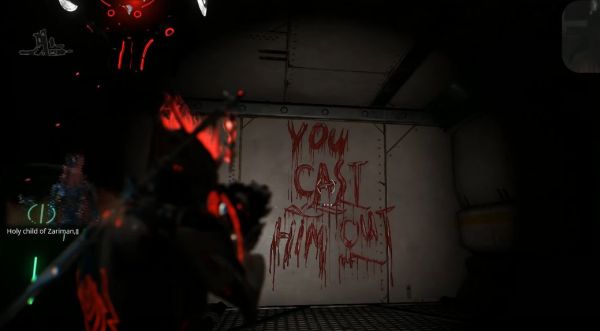 At this time, you’ll get a transmission from Palladino, a former Red Veil servant asking the Tenno help.
Lotus will mark the location in the mini-map and as you follow the way you’ll face well-armed Red Veil operatives waiting for you.
On the way, Palladino will speak about the Red Veil scared mused has abandoned the temple and now the veils are in chaos,
And that you need to bring her to the safe in Iron wake.

Following the map and reaching Palladino you’ll need to protect her and fight a horde of faceless and weaponless Red Veil operatives.
You have to defend Palladino for around 50 seconds before you can proceed to extraction and finish this rescue mission. 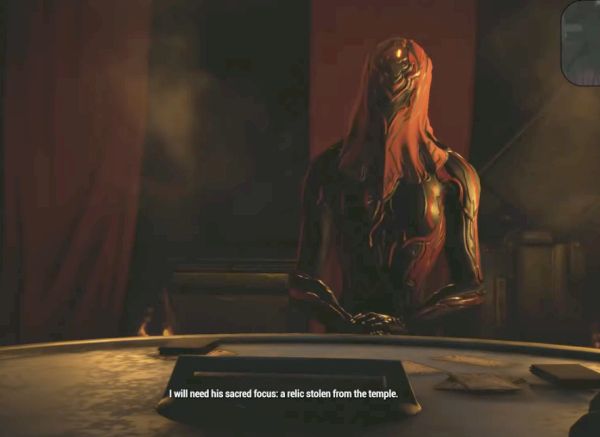 Returning to the ship, you’ll grant access to the Iron Wake, a base belongs to the Steel Meridian syndicate on Earth where you can meet Palladino, the holy speaker of the veil.
Entering the room you’ll need to transference your warframe vessel before meeting Palladino.
She introduces herself as a spiritual medium able to speak with the other side like her mother, but she’ll not be able to access Rell because he’s out of his vessel.
She needs a stolen relic called the ‘scared focus’ to be able to commune with him and to calm the Red Veil members.
Lotus is not trusting Palladino story, but never less she sends you to the mission.

As you land in Hydra you’ll find yourself in a dark ship and Palladino voice encourages you to find Rell’s object of focus and assure you that you’re near it.
Following the yellow mark, you will see a wall smear with blood with the words “He suffers while you dream”.
From seeing this message, Palladino concludes that Rell’s is suffering.

Also From the conversation between Palladino and Lotus, it will come out that Rell was a Tenno who was outcast by Margulis
, an elite scholar of the Orokin, because he was different and that the Veil originated from others studying Rell’s ways.
A voice will say “Rap, Tap,Tap. The man in the wall” and Palladino will ask the Tenno to follow the voice.
After locating the sound source, you’ll see dead bodies of Red Veil operators and a relic called Donta in the center of the room.
The Donta was given to Rell by his mother and it helps to calm and focus him. 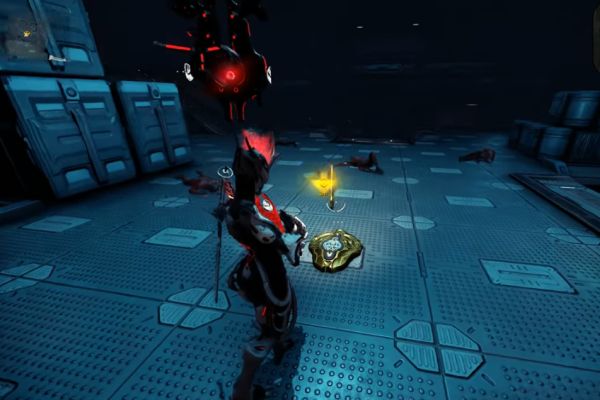 As you take the relic, the mysterious voice will be heard again claiming that the relic belongs to him,
Then an evil figure of Rell will appear as a shadow with a dark image and you’ll be attacked by a group of Red Veil zombies.
You can’t kill evil Rell or need to fight the Veils, so the only option is to hack a terminal, open the door and go back to ship as Palladino will tell you.

Going back to Palladino at Iron Wake you give her the Donta relic and she’ll try to communicate with Rell.
Tenno will have to play a mini-game where he sees a card of different face each time expressing Rell’s emotions.
You should choose one of 4 emotions describing best the emotion on the card.
In the background, Rell’s mother will speak with Rell as it was something they used to do in the past.
The last one will be a happy face card with all options the same and the mini-game will end. 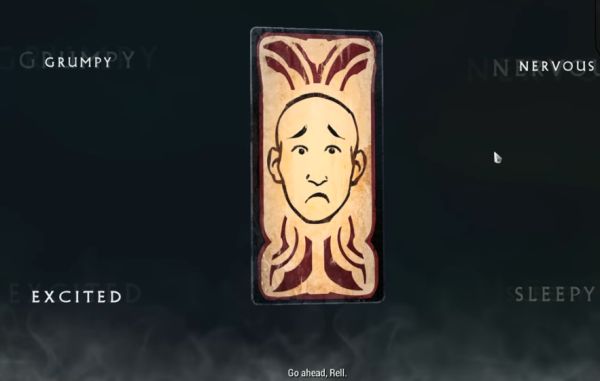 Lotus will ask you to return to the orbiter as she has a theory about this.
She suggests that he disturbances are transference energy split apart from a single mind and
wonders if it’s possible to capture those manifestations and send them back.
Ordis suggests using Cephalon Simaris tool, the Kinetic Siphon Traps that might be able to collect these energy splits.

Before proceeding next, make sure you have at least 9 Kinetic Siphon Traps equipped in your gear inventory.

You start the mission looking for those manifestations of energy splits that apparently a result of a Void exposure.
These manifestations have an effect on human minds as Rell warned about.
Arriving at the target on the mini-map, you will see a blood message on the floor with the words “Blinded she cast him out”.
Than Rell’s emotion manifestation with a black body and a white face will appear saying that too much noise makes him angry.
Suddenly the manifestations will attack you and you need to use the Kinetic Traps to catch them. 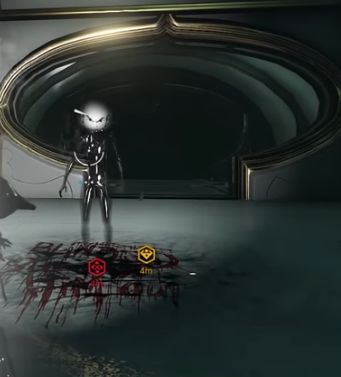 You’ll need to catch 3 emotions using the Kinetic traps in different locations as Lotus will guide you.
Beware as you can’t kill the emotions outside, you need to catch the emotions first, but they can be deadly for the Tenno.
If you get too close to them they will reduce your movement speed or attack you.
Once all three emotions are captured and destroyed, go to the extraction point avoiding Rell’s attacks.

Palladino is concerned that Rell will not be whole again as the disturbances are getting stronger.
Lotus asks if Rell has a cryosleep persevered as other Tenno had on Lua, but Palladino answer that this was not an option and
urges the Tenno to return Rell to his home.
Following the mini-map yellow guide mark, you’ll come across another blood message on the floor with the words:
“You rejected him He saved you”
As in the previous mission, you need to capture 3 manifestations using the Kinetic Siphon Traps before you can extract.

Lotus wonders how Rell has lived this long without the long dream (cryosleep) and Palladino answers
That he didn’t, he gave up on his humanity forever to transfer his soul (consciousness) to his Warframe, the immortal vessel.
Proceeding to the target, you’ll need to kill many Red Veil Fanatics along the way and again to deploy Kinetic Siphon Traps
To catch 3 of Rell’s emotions while avoiding his manifestation’s attacks.

When no more targets are left, Palladino will bless you and will say that Rell has returned to his Warframe (sacred vessel).
She will ask you to join her in the Temple for conducting the join act because she’s afraid to do this alone. 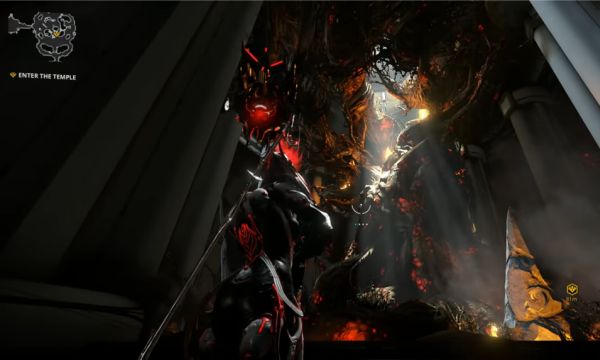 Lotus says that if Rell is caught too much time in this transference loop delusions, as a result of the void exposure,
it can have a catastrophic psychological effect on him.
Palladino will ask the Tenno to destroy the chains that bind the harrowing vessel, so you need to kill Rell and destroy his warframe to help him in finding a sense of peace.
Walk until you find a big red burning tree, then get inside his hole walking down to find the temple.
You must leave your warframe outside to enter the temple, but in the Transference Operator form, you will have the Void Beam as a weapon. 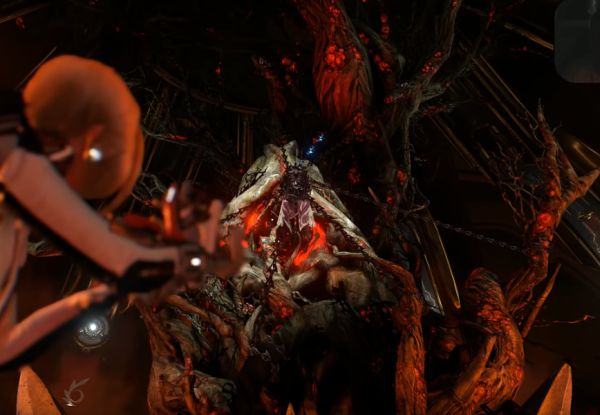 Inside the temple, you will see another big tree where the Warframe is tied in chains, aim at and shoot to destroy the chains and to free Rell.
As you Break the chains for the first time Palladino will say that something is wrong and that’s not Rell.
A scary voice coming from the evil inside the Warframe will say “it’s my turn to ask the questions”
and then cards with emotions will shown and Rell’s mother’s voice will ask “are you, O.k Rell ?”
Selecting one card and the other scary voice will talk shortly than a group of Red Veil Fanatics will attack you.

What you need to do is killing enough Red Veil Fanatics and than breaking the chains using the Void Beam when the Warframe turns blue.
Then another emotions card set will appear where you need to select the best description and the process repeats 3 times.
After totally breaking the chains the Warframe is destroyed and Palladino encourages Rell to be free.
Rell will ask about the “man in the wall” and Palladino replies that now the Tenno will be responsible for this as they all owe this to Rell.
Three similar cards of “sleepy” will shown for the last time and Rell will vanish to find his peace. 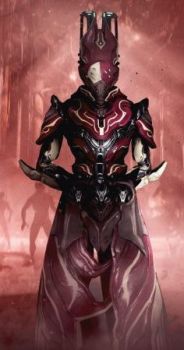 On the Orbiter, you’ll encounter a doppelganger greeting with “Hey Kiddo” which will disappear after a few seconds.
The quest is complete and you’ll reward now with the blueprint for the Harrow Warframe along with the ability to access Iron Wake on Earth.
If you bought Harrow with Platinum before playing the quest, then In your Inbox you’ll find a message from Palladino thanking you for sending Rell to rest and giving you a gift of Melee Riven Mod (not sure if this random or not) instead of the Harrow Warframe.