Warframe Mods Guide And how to get Condition Overload 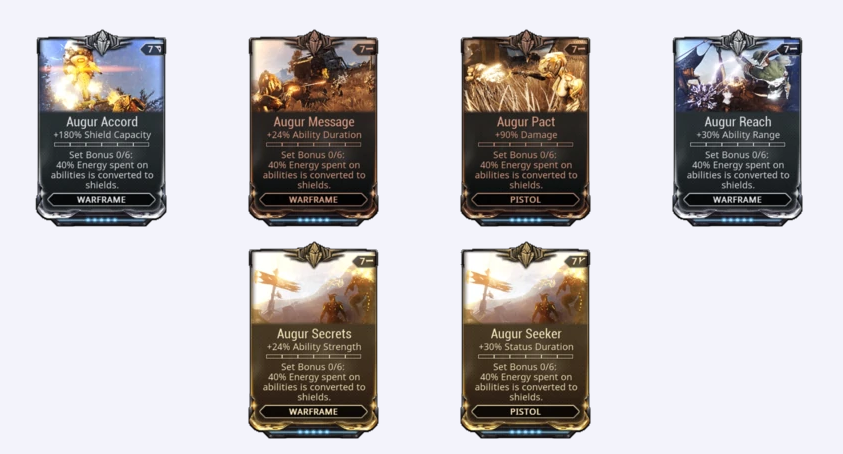 Mod is short for Module which is actually an upgraded system for many of warframe game elements: weapons, speed, power, Warframes, Companions, etc.
There are nearly 1,000 Warframe mods available,most mods are tradable except for a few ones.
Let’s look into the basic characteristics of mods so you be able to understand how they work and what they mean. 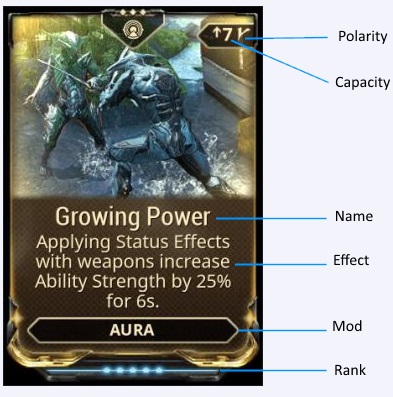 Capacity drain tells how much space the mod will take up on a piece of equipment.
Because capacity is limited there can be some mods that take more capacity and leave less for other mods.
The maximum basic mods capacity is 30 and it equals the player’s mastery rank, but there are ways to extend it.

Therefore you will have a mods capacity of 60 after doubled using Orokin Reactor
and if Aura mod is used (more on that later)  it can get to a maximum capacity of 74.

This affects how much capacity drain the mod will take in a mod slot on a piece of equipment.
Having specific polarity that matches the slot polarity reduces the capacity cost by 50%,
It may also increase it by 25% if the mod is placed in a slot with a different polarity or remain neutral.

There is a special resource named Forma that can use to change the polarity of a mod slot.
With Forma you’ll be able to add or remove polarities to slots.
The easiest way to acquire it will be to obtain a Forma blueprint from opening Void Relics and then to craft it.

The name of the mod and the bonus (Effect)  that the mod provides when attached.

Indicates the type of equipment or set the mod belongs to.

Mod rank is a number from 0 to 10 you need for Fusion (upgrade), each level requires twice the mod energy than the previous rank to level up.
You can use Fusion to increase a mod rank along with Endo.
Endo is a form of energy used in the process of Fusion and helps to upgrade the effectiveness of mods.

Mod Transmutation is a method to combine unranked mods with the chance to generate a random more desirable mod.
But there is no recipe to produces a certain mod and it’s mostly based on chance.
To make a transmutation, you need to combine four unranked mods, the transmute cost depends on the rarity of mods used.
Alternatively, You can use 3 selected mods and one Transmutation Core to guarantee a random mod of a specific polarity.

There are different types of mods, but mods can only be attached to their same type.
We’ll only mention a few:
• Warframe mods used to improve certain abilities.
• Auras are unique mods that increase the player’s Warframe total mod capacity.
• Weapon Damage Mods to increase your damage output
• Nightmare Mode Mods are essentially mods with dual stats
• Warframe Augment Mods are special mods available only from Syndicates.
When installed, Warframe Augments alter a Warframe’s powers to perform additional effects, enhancing that power’s utility.

These are dual stat mods where one gives positive stat bonus and the other negative stat bonus.
Each Corrupted Mod has an equal chance to drop.

These are a unique class of Mods (6 at most) that can increase bonuses when one or more mods in a set are equipped on the player’s Warframe and weapons.
These mods can’t be upgraded by a regular fusion.

To install mods on an item, drag a mod from the collection and drop it on a Mod slot, you can also sell or dissolve mods if you like. 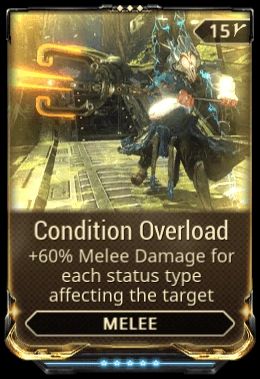 This is a Legendary Melee mod that can give up to 60% more melee damage for each status type affecting the target.
It’s transmutable with Madurai polarity, has a Trading tax of 8,000 credits and was introduced in Update 19.2.
Each rank adds 10% more effect to a maximum of 60% at rank 5.

Damage Multiplier is × 1.6^n
Where n is the number of unique status procs currently affecting the enemy
Examples:

You’ll be able to multiply your total melee bonus damage with this mode, but only subsequent strikes are amplified and not the hit.

How to get Condition Overload Mod? 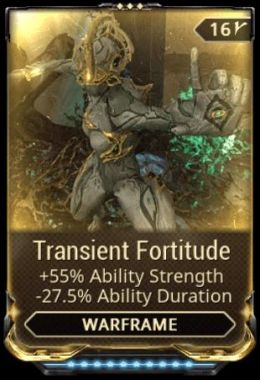 This is a Rare Warframe Corrupted mod that can give up to 55% more Ability Strength but reduce the Ability Duration down to -27.5%.
It’s Untransmutable, Madurai polarity, Trading tax of 8000 credits and was introduced in Update 15.0.

How to get Transient Fortitude Mod?
You can get this mod from an Orokin Vault in the Orokin Derelict (aka The Golden Door).
It has a drop chance of 4.35%.

Unlocking the Special vaults in Orokin Derelict requires a unique void key called a Dragon Key which has 4 types.
Dragon Key Blueprints are obtained through the Clan Dojo’s Orokin Lab.
Removing the Corrupted Artifact inside the vaults will cause the Corrupted to appear and inflicts a random Dragon Key penalty on the Warframe who picked it up (hence Corrupted mod).
Assembling a squad with all 4 dragon keys is probably the best way to success in such a mission.
Please note to equip the key in your wheel before the mission and to remove it as soon as it ends, otherwise, you’ll be carrying the penalty! 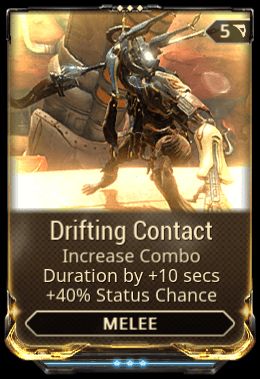 This is a Rare Melee mod which extends the duration of Melee Combo Counter up to 10 seconds and increases the status chance for a maximum of 40%.
It’s transmutable, Vazarin polarity and was introduced in Recurring Nightmares (optional difficulty modifier).
It has a drop chance of 22.56%.

How to get Drifting Contact Mod?
It can be obtained from medium Nightmare Missions found on Phobos, Jupiter, Saturn, Void, Lua, Europa, Ceres, and Kuva Fortress. 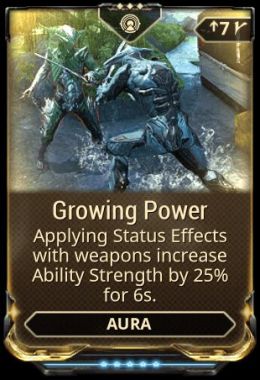 This is a Rare Aura mod that temporarily increases Ability Strength after inflicting a Status Effect with weapons to a maximum of 25% for 6 seconds.
It’s Untransmutable, Madurai polarity and was introduced in The Silver Grove.
It has a drop chance of 6.06%.
The mod triggers only when equipped with weapons, and as with all Aura mods, it increases the amount of mod Capacity in contrary to other mods.

How to get?
Growing Power is dropped by the Knave Specter in The Silver Grove quest.
Specter is summoned by using the Nightfall Apothic on the Silver Grove’s Shrine and
he must drop one of these items:
Pistol Amp         51.52%
Blind Justice      36.36%
Growing Power   6.06%
Crimson Dervish 6.06% 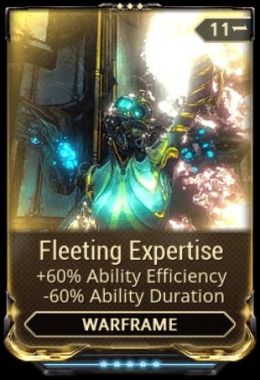 This is a Rare Warframe mod that increases the Ability Efficiency by 60% Maximum but reduces the Ability Duration of Warframe by the same percentage.
It’s Untransmutable, Naramon polarity and was introduced in Update 10.3 and has a drop chance of 4.35%
Best to equip this mod on Warframes that don’t relay much their Ability Duration like the Mag.

How to get?
You can get this mod from an Orokin Vault in the Orokin Derelict.
As in Transient Fortitude, the best advice is to craft a few of each of the four Dragon Keys and to run together as a group. 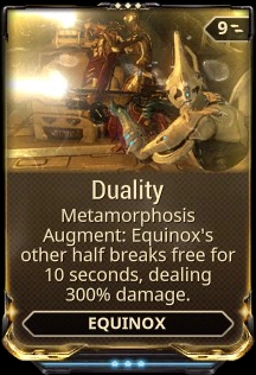 Duality is a Rare Warframe Augment Mod for Equinox, that makes her transforms between her night or day forms, for a maximum of 10 seconds.
When casting this Metamorphosis, Equinox will switch forms, temporarily gaining bonus shields and armor in Night-Form,  or bonus damage and speed in Day-Form.
This will also create a Specter that will fight alongside the player armed with the weapon Equinox was using during casting. 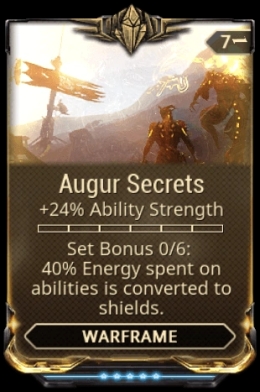 This is a part of the Augur Mod Set that increases the Ability Strength of a Warframe by a maximum of 24%.
When equipped simultaneously with other Augur Mod set, the energy spent on abilities is converted to shields (up to +240%),
can be stacked with Brief Respite mod for a total energy bonus of +390%.
It’s Untransmutable, Naramon polarity and was introduced in Update 22.0.

How to get Augur Secrets?

The best way to get Augur Secrets mod is shown in the last row.
Cetus bountie stage 4 or 5 missions, Level 30-50 Requires Mastery Rank 3.
The final 5th stage has a 4.76% chance of dropping during Rotation (pool) B. 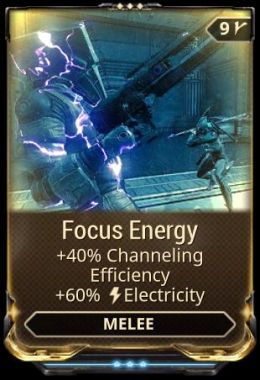 How to get this mod?
Obtained from Nightmare Mode rewards at rotation C. 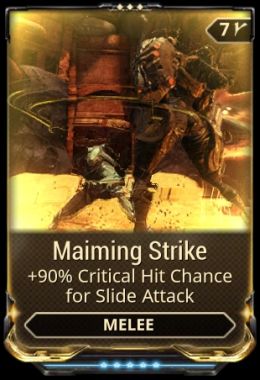 A Legendary melee mod which increases the chance of a critical hit on slide attacks to a maximum of 90%.
It’s transmutable with Madurai polarity and was introduced in Hotfix 18.4.1.
Each rank adds 15% to the Critical chance from +15% on rank 0 and up to +90% on rank 5.
Very high critical chances on slide attacks can be multiplied by blood Rush mod and the set mod effect of Gladiator Mods.

Dylan has a passion for PC games of all kinds since he was a kid. He spends hours exploring and diving into the fascinating world of gaming. When he is not playing, he likes traveling and working on his retro motors collection.
You might also like
WarframeFEATUREDGAMES