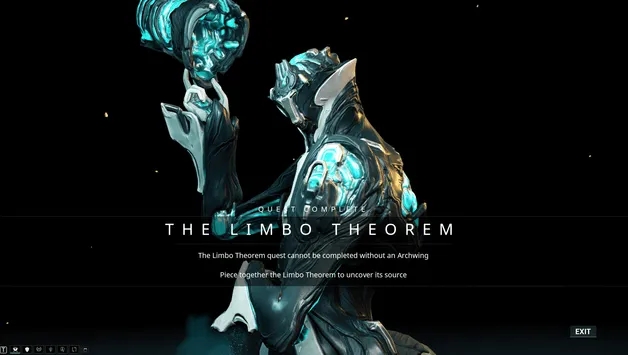 Introduction of The Limbo Theorem

The Limbo Theorem serves as an optional “Lore Quest,” landed with the releases of Update 15.0. In this quest, players are required to piece together the meaning found behind the strange theorem. Completion of the quest is a bit tricky, and sometimes you stuck somewhere and found no solution to come out. You should know that the completion of the said quest will reward you with the parts you need to build the Limbo Warframe. To give you access to the quest, the game requires you to complete The ARchwing Quest first.

We understand it can be difficult to complete “Warframe The Limbo Theorem” because we have seen many times across the web “The Limbo Theorem Quest can’t be completed”; therefore, a complete The Limbo Theorem guide has been compiled to help you in completing the said quest for massive rewards. The more you play, the more you earn is the simple rule of the game. The navigation will be done through a Third-person perspective, and you can shoot other warriors using equipped weapons to make points.

How to Unlock The Limbo Theorem Quest?

To complete the Limbo Theorem, you need to unlock it first, and that is only possible with the completion of Jupiter ,Europa Junction. Once you have done, the game rewards you with The Limbo Theorem Quest. After that, you should visit the Quest Section of Codex, where you find all unlocked quests and can choose one of them to complete. Once you discover the Limbo Theorem over there in unlocked form, you merely click Begin Quest to start. After accessing the quest, you will receive a message in your Inbox from Ordis himself.

After hitting the Begin Quest, you will receive a message in your Inbox from Ordis, and some conversation will be displayed to your screen like this:

“So, the Limbo Theorem you have picked up, and it’s supposed to lead you to a new Warframe? Well, it’s woefully incomplete!”

“Okay. There’s one thing here, a constant, a tuning frequency, but it’s so minute, the Liset’s anterna would never be able to…..”
“Unless…. Go to your nav console, I have got an idea.”

The transmission will provide the player with the blueprint for the Limbo Theorem key (this is not the quest blueprint!), which requires to craft three Proof Fragments, a form of Nav Coordinates, obtained by killing the enemies from the quest.
To complete the quest, you’ll need a total of 9 fragments.

Before you begin the quest, please note that Claiming a component while The Limbo Theorem is not your active quest results in the quest not completing!

Your first quest takes place on Mars, and the end of the equipment section will lead you to a screen where lots of planets are available, and pop will appear with a quest you have to complete, showing the quest title.

Before the quest start, a screen appears, displaying your objectives to complete, such as:

After that, Ordis will send you to Syrtic, Mars, to tap the communication towers of Grineer in hopes of scanning the Limbo Signal. During the game, all challenging missions will provide you with an Archwing Interception task that requires you to complete a single round.

Moreover, the mission’s main task isn’t in the Interception mission, but in gathering Proof Fragments that will be dropped from defeated enemies, which resemble Energy Orbs. Throughout the mission, you have to collect there Warframe Proof Fragment, and once the said number acquired, the interception mission will be completed, and you become able to start crafting the Limbo Theorem, which requires approximately 60 seconds. Once done, you will receive a message from Ordis, “Eagerly awaiting it.”

With the completion of the mission, you won’t be promoted, even though they have gathered enough Proof Fragments to create the Limbo Theorem. You need to check the Theorem blueprint manually to see if they are enough or not.

Ordis redirects you to Cambria, Earth, on a challenging Excavation mission to see the lead of Ordis. You need to find out what is the requirement of mission and you can check over here.

The mission requires you to excavate up to 300 cryotic; after that, you are awarded the Limbo Neuroptics Blueprint. The completion of the said mission will force Ordis to rethink once again to change his opinion on the Theorem and will surely make more sense over it.

“Operator, I found a new Theorem for you hidden deep in the Warframe. Now, these are starting to make sense, I mean they’re nonsense, but some logic is there in nonsense.”

After that, Ordis will move to Mars once again to gather more Proof Fragments to Craft Limbo Systems Theorem. Once you completed it, Ordis will send back to another coordinate, who will extrapolate the discovery about the Rift’s existence and the connection to Limbo.

To extract the Limbo Component, you need to undertake another Excavation mission, and this time, your search leads you to the discovery of Limbo System Blueprint on Martialis, Mars. Once obtained, Ordis will appear to say the following:

“Operator, do you understand, the Limbo is telling us his story is pure math, and I would like to say, he’s witty.”

“You’ve to forge that blueprint ASAP.”

After that, once again, you need to craft Limbo Systems before moving ahead on the next step. Once created and claimed, Ordis would say:

Again, you are directed to Syrtis, Mars, to collect more Proof Fragments to craft Limbo Chassis Theorem. After building the said theorem, Ordis appears to say something for you.

During all missions, players can navigate the world from a third-person perspective and use fully loaded weapons to battle against enemies to obtain in-game currency. After completing three missions and fulfilling their requirements, there’s a final mission that the player needs to complete at any cost to complete the Limbo theorem.

The fourth mission takes place in Ose, Europa, where you have to conduct a final round to find the Limbo Chassis Blueprint. After having a blueprint, Ordis will be back in a happy mode and excited about the discovery of the last piece. Ordis says:

“You’re in the final part, and I can’t wait. What harrowing leaps of cross-dimensional gymnastics will he attempt next?”

During the last mission, you have to create the Chassis to advance in the quest. You should know that beforehand that the Chassis Theorem needs an Argon Crystal to build. After acquiring the Limbo Chassis, Ordis will read the rest of the Theorem and find out the death of Limbo in the process.

When will the Quest be considered as completed?

After completing all missions, the game lets you claim Limbo Chassis. Once done, the quest will be considered as completed, and you can start creating Limbo using the Limbo Blueprint. Following the guide step by step, for sure, you will efficiently complete all of your missions to accomplish the quest.

As we seen, many players find themselves puzzling with some issue like-

This section will try to highlight some of these points.

Q1: I just crafted the Limbo Neuroptics Theorem Blueprint and played the mission, but now the navigation doesn’t tell me what to do next

Q2: I crafted the Limbo Chassis but quest is stuck on last part of the quest.

A2: This issue occurs due to how sensitive Warframe’s quest system is and how certain quest tasks doesn’t track properly when the quest isn’t set as your Active Quest at the Codex.

If this happens to you, please “Submit a request” to Warframe Support under “Quests” > Category “The Limbo Theorem” in order for us to help you progress the quest.

Q3: I completed The Limbo Theorem quest, but I did not receive the Limbo Blueprint.

A3: The main blueprint for Limbo is not part of the quest’s reward.

Q4: Can I do the quest more than once, what if I want to obtain additional copies of Limbo?

A4: You can do the quest only once, but there are still some ways to get more Limbo warframes.
You can Purchase him fully built from the Market for 200 Platinum;
or get Limbo’s component blueprints from Cephalon Simaris for 150,000 Standing;
or open or trade Void Relics components of Limbo Prime.

"A day without playing is wasted day" This is Ankit motto in life. Ankit is not only one of our best Indian gaming bloggers but a great fan of Arcade and Xbox games. He loves to break records on well-known games and to do scuba diving in his spare time.
You might also like
WarframeGAMESWALKTHROUGHWARFRAME