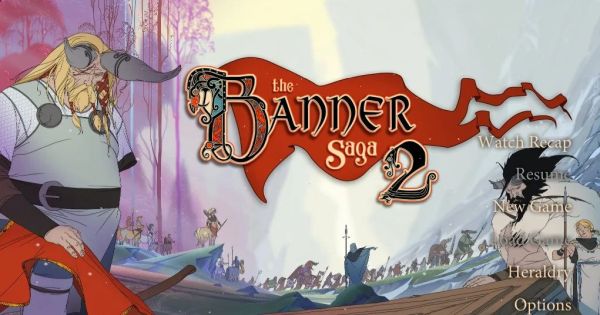 The Banner Saga 2 is the sequel to the breakout indie strategy game, The Banner Saga.
Developed by the indie studio comprised of ex-Bioware staff, Stoic Studio, the game mixes Nordic-inspired lore with tough strategic battles. The Banner Saga 2 is less of a sequel and more of a direct continuation, following the saddening events of the previous game. Once again, players are tasked with undertaking the difficult role of a caravan leader, guiding thousands of clansmen through the dangerous wilds.

By combining difficult moral choices (with significant consequences), deep and satisfying combat mechanics, and a beautiful world full of lore and imagination, The Banner Saga 2 stands as one of strategy gaming’s greats.
The Banner Saga 2 is more than just a tactical role-playing game, prepare yourself to have fun!
Note: This review contains major spoilers for The Banner Saga, the first game in this series. Please be aware of this before reading.

If you have completed the first game, you can simply import your save game, which will remember your choices and continue the adventure as so. If you don’t have a previous save game (or simply want to start fresh), you must choose whether to play as Alette or Rook in your adventure. After playing through the entire first game as Rook, I opted to play as Alette.
The strong, red-haired archer has an impressive character arc, and although I missed Rook, I was satisfied with Alette as the hero of my journey.

Journey to the Human Capital

Following the events of the previous game, the beginning of your journey is rather bleak. The world is torn apart by war, with both humans and giants alike fighting against the slow-moving yet ominous threat known as the Dredge. Despite toppling a Dredge leader, their ranks persist, moving further into civilization and pillaging villages and towns. With nowhere left to turn, you must lead your caravan of fighters and clansmen to Aberrang, the human capital of the mystical and mythological world you inhabit. The road ahead is packed with obstacles, both dredge and human alike. As the leader, you will be forced to make tough decisions while also providing the caravan with defensive support.

A young archer named Alette leads the caravan of numerous characters, all with extensive backstories and motivations. From the towering giants known as Varl to the merciless mercenaries called the Ravens, your group is diverse with characters to meet. A select group of characters makes up your immediate circles of trusted advisers, such as the varl warrior Iver and the mage Oddleif.

Your journey spans across many weeks of travel, and as you experience various encounters and trials with your caravan, your bond with these characters will grow. I had a wonderful time continuing my adventure with many of the characters from the original Banner Saga, as well as the various new faces that get introduced along the way.

The narrative is mostly told through dialogue sections, although the lack of voice-overs means you’ll be doing quite a bit of reading. There are a handful of animated cutscenes as well, but the majority of the story is told through text boxes and conversations. You’re often presented with dialogue options when speaking to other characters, granting you a choice on how you want to represent yourself in diplomatic situations.
Generally speaking, The Banner Saga 2 hinges its story on player choice, which should compel you to continue reading every lengthy text box the game offers.

Although it has a fantastical narrative and is a bit complex on the surface, The Banner Saga 2 plays a lot like the classic computer game, The Oregon Trail. For those unfamiliar, you are tasked with escorting a large group on a lengthy adventure, where seemingly tiny decisions can result in your entire group dying of starvation. While the consequences in The Banner Saga 2 aren’t always as immediate as the previous example, they are just as deadly. Every decision you make, no matter how large or small, will have some bearing on the experience to come.

The very basic objective of the game is to escort your caravan to Aberrang without losing too many clansmen or dying yourself. The road is long and full of surprises, so this will be much more difficult than you’d think. Each day you spend on the road will eat up precious supplies, and you’ll have to ensure that you have enough supplies to survive through the trip. As you progress along the trail, you’ll run into random events that force you to make a decision. Whether it’s a struggling family that wants to join your caravan or a group of thieving raiders, you’ll have the ultimate choice on what to do. How you react to these situations has an effect on your caravan’s morale, effecting their efficiency in battle.

Luckily, morale can be improved and supplies can be restocked. Unfortunately, some decisions are very permanent, as any of your favorite characters could easily die if you are negligent. When things get exceptionally dire, you can set up camp and rest a bit. While you can’t resupply at camps (you’ll only find more supplies at markets in various towns), you can get quite a bit done. At camp, you’re able to rest for a full day, replenishing the caravan’s morale at the cost of supplies.

You can also train in the art of combat, learning new tactics through training challenges or turning simple clansmen into able fighters. The camp is also where you’ll upgrade your characters for and equip them for battle, as combat is another major aspect of the experience.

The Best Way to Fight the Dredge

If there were any complaints about the original Banner Saga, they most likely stemmed from the slightly repetitive combat. The Banner Saga 2 makes significant improvements in this area, introducing tons of new enemy types, player classes, and battlefield variations. You’ll often encounter something new after just a few battles, often forcing you to reconsider strategy and change up your party of heroes. Although the combat might be difficult to parse for newcomers, those who spent time with the first Banner Saga will feel right at home.

Battles play out via turn-based combat, alternating between your party of heroes and the enemy team. At the start of a fight, you’ll be able to move around your characters on the battlefield, positioning them for your initial strategy. There are a wide variety of character classes to consider, including tanks, archers, mages, healers, and more. You start the game will a significant roster of characters to bring into each fight, with a maximum of eight friendly fighters on the field at a time. Each character class has unique abilities to consider, so you’ll want to balance out your party according to your strategy.
I found it best to have a mixture of varl giants, archers, and high-damage soldiers. This way, you’ll always be able to take plenty of hits while dealing out significant damage.

Generally speaking, combat can be quite tough, even if you have a planned strategy. Those who run into the fight with axes swinging and not a care in the world will soon find themselves dead or injured. Enemies have two statistics to take into account: strength and armor. Their strength number represents the amount of health they have and the damage they will deal, while the armor adds additional points of defense. Your characters also have their own strength and armor levels, resulting in a never-ending cycle of quick math and smart positioning. However, if you take your time and think about each move carefully, you’ll likely find yourself getting into a groove. It can be very difficult at times, but overcoming the enemy and securing a victory feels very satisfying.

The Bottom Line on The Banner Saga 2

The Banner Saga 2 is a sequel that takes the same great gameplay of its predecessor and adds significant depth, all while telling a fantastical and riveting tale. The story continues to deliver a sense of discovery and danger, where your choices shape the events to come. Combat feels both familiar and new, with added enemy types and strategic options. It’s a game that feels polished in both narrative and gameplay, finely crafted by a small team of passionate developers.

I greatly enjoyed the tale of Alette and the entire caravan’s journey to Aberrang. Just when things might start feeling repetitive, unpredictable twists and turns keep things exciting. The Banner Saga 2 does a great job keeping the player engaged and invested, always carefully considering their next move. If you’ve been looking for a strategy game that has a bit more nuance and artistry, this is a great choice. Be sure you’ve played the original game first though, as the story of The Banner Saga 2 is far better as a continuation.