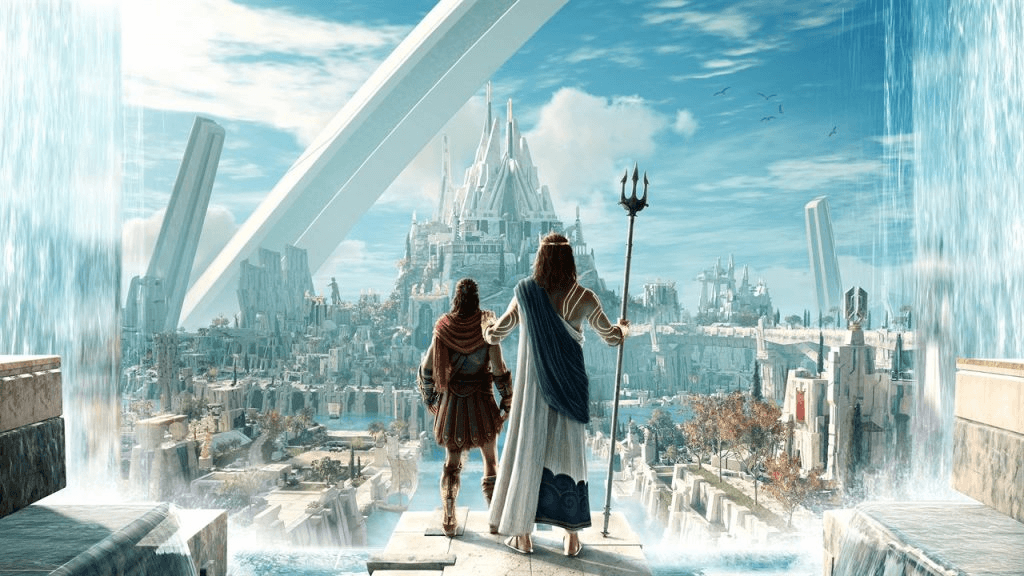 Assassin’s Creed: Odyssey was an already great game when it released last year, but developer Ubisoft wanted to add some extra fun for players keeping up with the game. In addition to the free Tales from Greece updates that have been providing new quests, new content has come from the six planned DLC packs. The first three told a story cemented in the Greek Isles, while the final three introduced players to life in true Greek mythology. Letting players roam free in three unique lands, the Fate of Atlantis DLC packs have been incredibly worthwhile and entertaining. The story of The Fate of Atlantis wraps up in the final episode, The Judgment of Atlantis. With the universe held in the balance, our hero must journey through the fabled city of Atlantis meeting some familiar faces.

This third episode in the Fate of Atlantis DLC series wraps up the story that started in the first episode, one that is both confusing yet intriguing. In the present day, Animus-user Layla Hassan attempts to learn the powers of the Staff of Hermes, a legendary artifact that was one wielded by our Greek Hero (either Alexios or Kassandra depending on your player choice). In order to unlock the knowledge needed to properly use the staff, Layla must live through simulations of major Greek worlds, guided by an ancient being. As time ticks down and the evil Abstergo agents grow closer to Layla’s location, her situation gets more and more dire.

Although Layla’s story lays the groundwork for the Fate of Atlantis DLC, it’s hardly the focus. Like in previous episodes, players will only see Layla’s side of the story every so often. Most of the time, you’ll be controlling Alexios (or Kassandra), making your way through numerous quests and missions in Atlantis. Like Layla, Alexios is seeking the ultimate knowledge of the Staff of Hermes, which will unlock his inner powers and true potential. This proves to be an issue in Atlantis, as the city is already fallen on some tough times.

When you arrive in Atlantis, you’re immediately greeted by the god of the ocean, Poseidon. The city is on the brink of a civil war, with the ancient race of known as the Isu have become frustrated with the humans living within the city. As a way to mediate the chaos, Poseidon entrusts Alexios with the role of Dikastes. As the Dikastes of Atlantis, it’s your job to act as Poseidon’s right hand, enforcing the rules of the kingdom and ensuring the peace is kept. This story weaves into the overarching story of the Staff as well, providing a thrilling conclusion to the Fate of Atlantis tale. In many ways, the story in The Judgment of Atlantis is one of the strongest in Assassin’s Creed: Odyssey, due to both its interesting sub-plots and large scale consequences.

The City of Atlantis and The Fights Within

Just like in the main game, your overall objective is to explore the map and help those in need. The city of Atlantis is essentially a few large rings, each one expanding and centering on Poseidon’s towering palace. The city is incredibly high tech, with an almost sterile white color to all the structures and buildings. There are several strongholds that loom on the outer ring, a beautiful garden to discover, and plenty of other locations of interest.

In your time as Diskastes, there is no shortage of problems to solve. In fact, The Judgment of Atlantis has some of Assassin’s Creed: Odysseys‘ most memorable quests and scenarios. The tone of the story flops between dramatic, action-filled, and even a bit of suspense and horror. As normal, you’ll mostly solve these problems by talking with citizens and beating the snot out of anyone in your way.

Although there are no mercenaries to hunt down, Atlantis has its own share of secrets to discover. Like in the other Fate of Atlantis episodes, there are three unique “Keeper Insights” to discover. Each insight lets you morph an existing power into an enhanced version, offering some pretty cool combat options. From enhanced poison to giant blades of gold, the Keeper Insight powers in Judgment of Atlantis are both effective and fun to use.

Whereas other episodes in the Fate of Atlantis story had Alexios toppling cults and getting his hands dirty, the Judgment of Atlantis episode focuses in on the “knowledge” aspect of the Staff of Hermes. Just like the Staff, Atlantis’ most important secrets are restricted to those with the proper knowledge. Within the game, this knowledge is represented by a small bar which grows as you discover a few key collectibles. Players can translate large Isu codexes and scan Isu caches to increase the bar. There are three levels of knowledge that can be acquired, and each level allows Alexios to pass through restrictive orange force fields around the city.

In addition to ultra-powerful abilities and unbridled access to the secrets beneath Atlantis, Alexios can also unlock some incredibly powerful weapons by visiting the Forge of Atlantis. There are three legendary weapons of Atlantis that can be crafted, each one focused on a different play style. These weapons aren’t for free though; you’ll have to explore Atlantis and discover valuable metal ingots to use in the forge. Once you’ve found enough, you can forge one of these super useful weapons and increase your killing power.

Final Thoughts on Assassin’s Creed: Odyssey – The Judgment of Atlantis

The Judgment of Atlantis is an excellent chunk of content that is both tons of fun to play and provides some solid closure in the Assassin’s Creed: Odyssey narrative. The city of Atlantis is as beautiful as it is intricate, with plenty of interesting places to find and stories to uncover. Hidden between the cracks are useful collectibles that encourage exploration, as well as ancient knowledge that makes things more interesting. While the map isn’t as big as previous downloadable episodes, the amount of content within more than makes up for that.

If you enjoyed the base Assassin’s Creed: Odyssey game or any of the downloadable content preceding Judgment of Atlantis, the odds are that you’ll also enjoy this final episode. The visuals are top-notch, gameplay stays fresh and exciting even dozens of hours into the experience, and the story is both surprising and satisfying. In many ways, Judgment of Atlantis is a perfect wrap up to the larger-than-life story started in the base game. It’s a treat to walk the roads of Atlantis and take in the sights, and a journey we highly recommend.