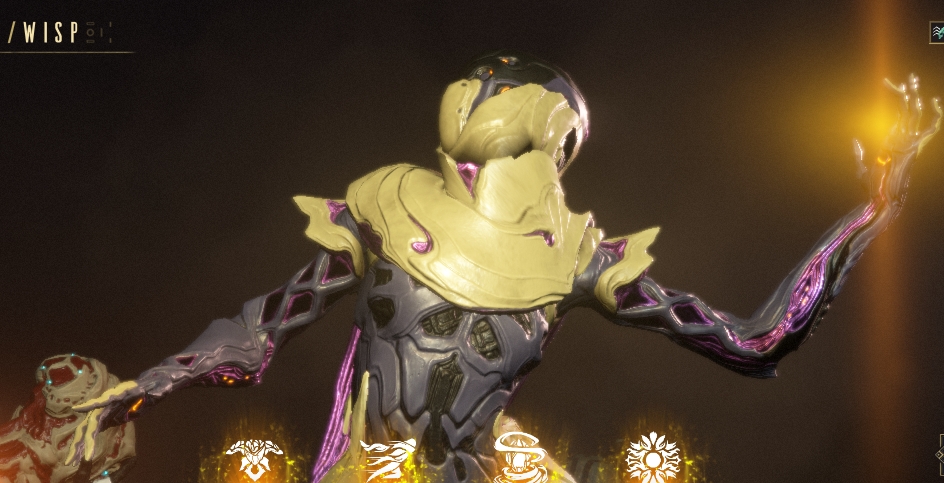 Wisp is one of the most elegant design and fun to play warframe available.
It comes with the best fluent movements and transitional animations in game and can be moded to tank, buff and defend.
Wisp is the first Warframe design with no feet on her model, as a result she floats above ground constantly and while in the air she become invisible.
At the time of writing there is no Wisp prime Warframe available.
Let’s see why the Warframe Wisp is so lovable among many players.

Wisp posses among the highest energy pool of all Warframes in the game along with Volt Prime,
Chroma Prime,Saryn Prime,Ivara Prime and Baruuk reaching to 200 Energy at rank 0 and 300 Energy at rank 30.

Wisp Signature Weapon (a particular weapons associated with a specific Warframe or Companion)
Is the Fulmin. While she use it, the weapon’s Alternate fire mode-switching animation is reduced from 1 seconds to 0.5 seconds.

Here passive ability is cloak for her and her Companions while she is airborne.
Wisp’s cloak makes her invisible to enemies until she lands or fires a weapon.
One great thing is, the Invisibility ability is not affected by Melee weapon strikes!
Allowing Wisp to use Melee weapon and still remain Invisible.
While cloak is active Wisp glows and emits energy particles according to chosen Energy color in her appearance.

You can choose to summon between 3 types of Reservoir filled with Motes to the use of wisp and her allies.
There can be up to 6 active reservoirs pods with a range of 5 meters.

Tip: Deploying a few Shock Motes can be very efficient during defense mission.

Creates a spectral copy of Wisp to confuse and distract enemies while cloaking herself and her Companion from enemy eyes.
Reactivate to travel to its position. Hold to have the image travel faster and teleport to its position on release.
Clone is capable of opening doors and pass spy laser barriers without triggering them.

Tip: passing lasers beams can be useful in spy mission to teleport and pass barriers.

Casting breach surge on Reservoirs will teleport Wisp to their location and gives a bonus of 200% to Breach Surge’s range.

Tip:Sol Gate’s solar plasma beam (see next) has a 100% chance to trigger a surge spark on every hit.

Opens a portal to the sun to create a solar beam with a a length of 40 meters
The beam has infinite Punch Through against enemy bodies and inflict up to 1,500 Heat and Radiation damage every 0.5 second!
Wisp is immune to knockdown while using this ability.

You can boost damage to 200% by holding fire at the cost of increased energy consumption but it’ll also cause Wisp’s movement speed to be slow by 50% while boosting.
Sol Gate consumes 12 energy per second while active and 24 energy per second when boosted and will remain active until Wisp’s energy is depleted or you can deactivate this ability by pressing ability key 4 once again.

Tip: while the ability is active Energy can be replenished by Energy Orbs,Arcane Energize,Rage and Hunter Adrenaline mods.

How to get Wisp Warframe

The Chassis, Neuroptics and Systems blueprints has a drop chance of 25.81% while the Main Blueprint has a 22.56% drop chance.
Defeating the Ropalolyst also rewards for one Amalgam mod from five possible.
You can also purchase the built and ready to use Wisp Warframe from the market for 325 platinum.

Note that all of the components blueprint require Hexenon ,
a resource of Corpus that can be acquired from any enemies or loot caches as well as Extractor drones only on Jupiter.
Nitain Extract is most easily obtained form Nightwave Cred Offering store for 15 cred.
You can find an Argon Crystal from the Orokin Void missions and Assassination missions as well,
but pay attention to the decay period of this resource to use it before it’ll disappear.
Tellurium is also a rare necessary component for the neuroptics blueprint and
you get it from daily login rewards or doing Grineer Sealab tileset missions like Uranus Ophelia Survival.

This bundle cost 655 platinum and includes:

Wisp was the first Warframe designed with a completely unique walking, sprinting and rolling animations.
However, when crouching, gun aiming, wielding an Arch-gun in ground combat, or extracting from a mission she still uses default animations.

Wisp Build for Speed and Strength

This build uses only two forma!
Two of the mods are Augar and one is prime ,It’s good when you need speed in capture and farming missions.

This is also a two forma build that has more than double armor compared to the speed build and 175% range.
It has Less efficiency and duration but almost the same strength.
It’s best for utilizing wisp cloak where she can stay longer in the air while been invisible.

This is a 3 forma build that has 152% duration,less efficiency than the first build, same range of 100% and some
less strength of 234%.
Good build for exploiting Wisp’s abilities to make duration longer.

Wisp is the 40th Warframe and a very nice addition to the game.
She can be a great buff, crowd control, defender or tanky Warframe all according to your
preferences and your personal play style.
It may be hard to farm Wisp but I defiantly love playing her and I think she’s excellent frame in any Tenno arsenal.

Dylan has a passion for PC games of all kinds since he was a kid. He spends hours exploring and diving into the fascinating world of gaming. When he is not playing, he likes traveling and working on his retro motors collection.
You might also like
WarframeWARFRAME