Risk Of Rain 2 Characters And How To Unlock 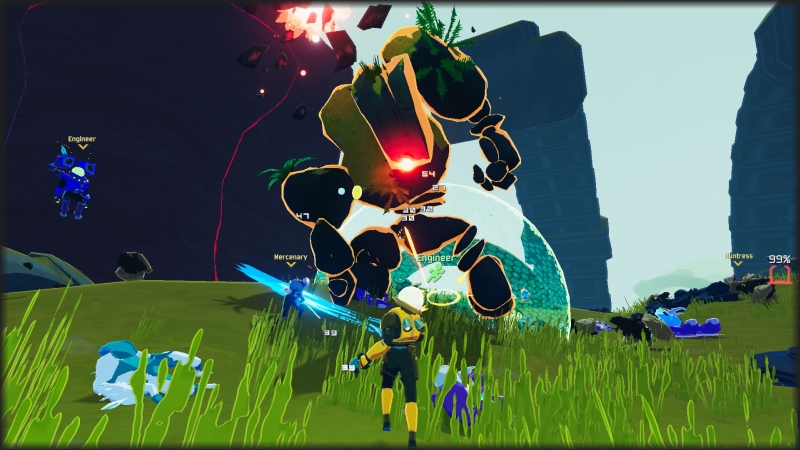 Seldom do games translate beautifully from 2D to 3D versions? However, Risk Of Rain 2 does that exceptionally well with a clean 1st person on the run shooter with a cool storyline. I have played this game for quite a while and decided to shred upon the insights of this game for anyone who is listening. However, I plan to chalk it out a complete step by step guide so you can learn from what I have learned while playing and through extensive research.

The first chapter is related to all the characters that you can select in Risk of Rain 2 as each character has a peculiar feature or features that you can use while dishing out those laser beams or fires. There are basically 6 characters to choose from. However, there is news coming out of some quarters that denote 4 more characters being built for the next update. Let us look at the 6 characters available at present.

This is the first character you set off with and does not have to be unlocked. Therefore, if you have to progress well in the game you need to be well versed with his moves, tips, and tricks; since most of the gameplay for characters unlocked later is similar to this one! Even when I get all the characters in my arsenal, I still use commando due to its complete ability to fight and complete missions. Moreover, it gains back health faster than all the other characters. The Commando is an easy character to handle with basic moves so you can de-clutter your mind while playing with him.

On the attacking front, his aim settles naturally on the controller which means you hit the target more often than not, just like an added assist function to your firing but just a little subtle. He also has the ability to run out of situations based upon his dodging abilities. Just get a group of enemies, engage & kill maximum possible and then run back like crazy. With a nice cooldown time, you will be ready almost instantly for the next skirmish. Most games think that Commando is a starter survivor and therefore must be a weak one. However, a quick getaway and crazy rapid-fire skills, he proves it otherwise. Have some fun while you are at it because it gets serious later on!

You begin playing with commando, so no need to unlock.

The robotic creature is my personal favorite because it gives a multi-dimension fighting ability. You can fight large crowds and bosses with the short-range nail gun or use a cluster of grenades to stun them before you open fire. This combined with a fast dash makes MUL-T a truly 2-dimensional survivor. However, an additional feature added to his arsenal makes it three dimensional which is swapping his basic gun for a long-range sniper rifle. This makes him the only survivor which can use two weapons simultaneously, with just the help of one button.

The more you practice, the more you learn about swapping from the short-range to the long-range weapon. Therefore, MUL-T is a considerably difficult character to play with but once you get the hang of the swapping function. However, he is great fun to experiment with while dashing, throwing grenades and then using the short and long-range weapon. MUL-T gets his name from a multi-purpose robot and rightfully earns it.

Every next character comes in with a better bargain at fighting with the enemies. If dashing out of tricking situation was the strong point of Commando and MUTL-T, the Huntress teleports out herself from the situation altogether. She also has a very strong multiple attack specialty that keeps on damaging enemies even when you are not firing at them. The laser beam (or that’s what I call it) can bounce on to about 6 enemies. Therefore, you must be careful that engaging with only one enemy with ricocheting glaive (I Google’d the name of the beam) will minimize the damage that you can inflict.
Another special move allows huntress to rain down arrows at a specific area, not once but once in a while. So an enemy camp can easily be targeted while you fight the short-range game. Another inbuilt capability of this survivor is mid-air charge holding ability. This makes you range out most of the enemies except those who can levitate from the ground while fighting. This has been one of the most picked characters in RoR 1 and the same is the case in RoR2.

Unlocking Method: Complete the first three levels with 0 re-spawn (or no deaths).

Like a true soldier from an ordinance corps, the Engineer is all about tactics rather than straight-up first-person shooting. He holds a lot of cool weaponry in his arsenal out of which the turret is the primary best. Once the turret is deployed, then it’s the turret and the enemies, all you need to do is to save the turret from close in enemies. Moreover, the Engineer is laced with all kinds of explosive elements that can be placed in order to keep the enemy at bay. These include proximity mines, bouncing Bettys, bubble shield (as a defensive mechanism) and bouncing attack fire like that of the huntress.

The best part of this survivor is that any booster that you pick for him applies automatically to the turret as well. Therefore, if you get a speed boost or a recovery boost, your turret gets the same. The best strategy that you can employ with the Engineer is by placing a turret, block it with a bubble shield and strategically place mines around it so it goes to work for the longest possible time.

The Engineer is unlocked after purchasing 40 drones in total.

He is the king of ice and lighting. She is the star of using cooldowns and different elements to her advantage. Her basic attack is the fireball but it is directly associated with her charge system. Once you run out of charges, you will not have any attack. However, her cool downtime is far quicker than any of the survivor which gives you the charge-back quickly. Once you are in the pitch battle, it gets a little time getting used to not having an attacking option. Once you practice enough, you get used to it and play accordingly.

One of her attacking moves that give you a big advantage is the lighting orb which allows her to throw down electric bombs. They explode and stun/damage everyone in its range. The more you hold the throw button, the more it charges and brings about a bigger damage. Just aim it at a place where the enemies are scattered and all will get a hit depending upon their distance from the impact point. The second element she controls is ice. You can build an ice shield to stop the enemy from coming your way or freeze the enemy. If the enemy has less than 20 HP, they will die right away. If the HP is more than 20, they will be stationary for a considerate amount of time.

Then comes fire, which is a flame-throwing ability that dishes out heavy damage but works at a short-range only.
Do remember that this survivor cannot dash or teleport so you will have to use your ice wall in order to fend off enemies. The best way to deal with this disability is to play the attacking game especially after acquiring cool down and speed boosters.

Unlocking Method: This is a little trickier as you need to work for it.
You will need 10 lunar coins which you can collect by killing enemies.
You need to find the Newt shop and free her with the use of the coins,she will be stuck in a block of ice right on the side of the Newt.

This character has its own peculiar attacking methodology which stands her out from the other survivors. This survivor plays with a sword only which looks like a misfit in the era of guns. However, if played correctly, he has the most damage inflicting gameplay. The sword is something that you will hardly use but the Mercenary itself becomes a weapon of force. You can just launch a flurry attack where you teleport to the nearest enemy and throw out attacks in a rush. Moreover, you do not bear any damage once you are in the flurry attack mode. All you need to do is string one flurry with another and you will keep killing enemies and bosses without getting a hit! Use the dash stun move along with double jump ability combine with flurry attacks and you have a winner amongst the current six survivors.

Unlocking Method: Once you reach Obelisk by reaching level 8, you will find a portal that will take you through a floating path.
Once you are prompted ‘Obliterate’ yourself, choose it and you will unlock the Mercenary.

Each survivor has a particular fighting style and you need to practice with every one of them in order to see what suits your joystick
gameplay. This is just the intro of the characters; the real fun begins once you land your first attack. The next blog will run you through a walkthrough that sits right up there in the tips and tricks column. You can always YouTube them but any gamer will tell you that reading and implementing has a far more interesting kick than just watching a video and duplicating game plays without flinching!

"A day without playing is wasted day" This is Ankit motto in life. Ankit is not only one of our best Indian gaming bloggers but a great fan of Arcade and Xbox games. He loves to break records on well-known games and to do scuba diving in his spare time.
You might also like
Risk of rainGAMES

Risk of Rain 2 items And How to Unlock

by Ankit on October 30, 2019
Intro Any person who has ever played any kind of shooting video game understands the importance of items (or add-ons) in the game. This holds not only good for weapons but all support equipment like maps, health potions, shields and superpowers. The same holds good for Risk of Rain 2 items which are based on […]