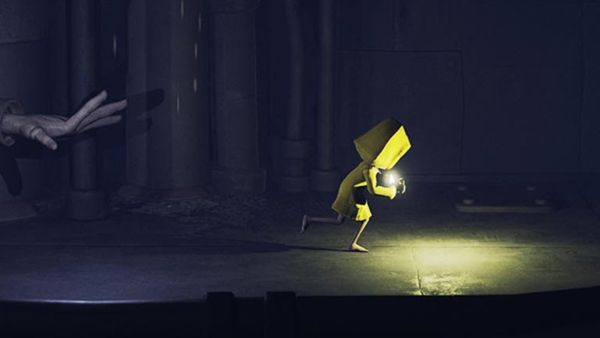 What is all about

Little Nightmares is one of the best Puzzle-Platform and Survival-Horror video games, offering only Single-player mode.
Tarsier Studios develops the game and released on 28 April 2017 for Multiple Platforms.
It has been confirmed that a sequel to Little Nightmare will be released in 2020, introducing “Six” and a new playable character, known as “Mono.”

The story of the game follows a protagonist named Six, a cute girl who is trapped in a strange vessel full of dangerous creatures and monsters.
However, after waking up from a horrible nightmare, the game involves the protagonist to resemble a woman.
Upon awakening, little nightmares six decide to flee the unforgiving confines while rejecting to save other trapped kids.

Who or what is Six? 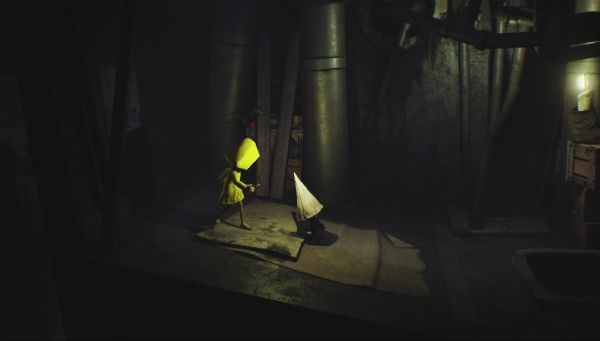 If you had played Little Nightmares, then you might know about “Six”.
She is the main protagonist in Little Nightmares video game and considering as the 2nd main playable character in its sequel,
Little Nightmares II expecting to release in next year.
Six is quite simple and wear a yellow-colored raincoat.
You would be amazed to know that she is noted for its quite silent behavior and smartness, as well. Six (the protagonist) is only a 6-year-old cute girl and possesses unique abilities, including climbing skills.

While playing the game, you will find her strong enough that she can support her weight on a rope and can take on a board, which is half of her size. She is the main character in Little Nightmares; therefore, the entire story is focused on her and starts when she is trapped in The Maw.

What Six can do?

Six is trapped in the Maw

What is The Maw? 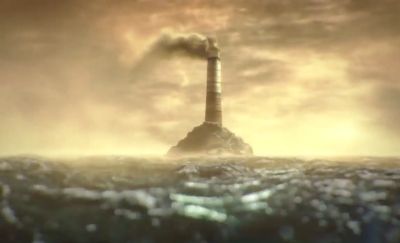 The maw is a substantial underwater resort amid an ocean.
As the protagonist, you can navigate the world, contains several levels from a side-scroll perspective, climb over objects to approach the specific locations, and fulfill the requirements of each assigned task to reach the end and win the game.
The end of the game is quite impressive, in which the protagonist (Six) will kill The Lady (the antagonist) and obtain her superpowers of snatching the life force of other characters.

You should know that the size of SIX is much smaller than any adult characters found in the game. If we considered her three times shorter than a typical character, then it’s not wrong. The protagonist has fragile limbs, and she is fully equipped with a yellow-colored bright raincoat that ends above her knees, containing only three buttons, two small pockets, and a hood. Upon watching her, you will discover that she has short black shaggy hair with bags that covers half part of her face, unleashing her small nose and a mouth, even you can’t see her eyes and forehead. She has only a cigarette lighter that she always keeps in her pocket when navigating the environment and not in use.

Background of Six (A Sad Story)

There’s something about Six’s past that you should know before starting the game. It was mentioned in the bio of Six on the official Little Nightmares website that she belongs elsewhere, revealing that she used to live somewhere before she reached The Maw. The background of the protagonist proceeds following the comic-style, implying that she lived in an unknown until she was abducted by a massive man who equipped with a trench coat and brought to The Maw. The story seems a bit filmy that revolving around a girl who is three times smaller than an actual person, and after kidnapped, she was brought to an unknown location and left for surviving.

Who is The Janitor (a Blind Man)? 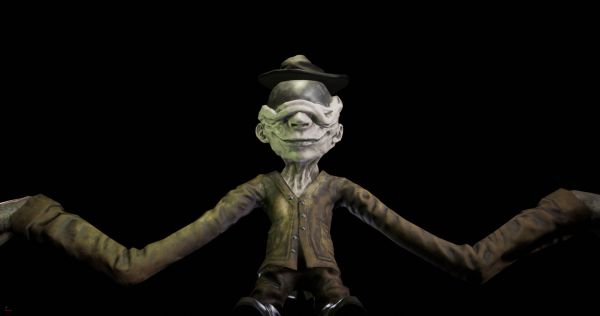 You need to know that The Maw is a massive floating area, situated amid the Ocean that is famous for imprisoning small kids. A blind and dangerous man, known as The Janitor is appointed by an unknown personality to take care of these children. However, at a specific point, Six successfully manages to escape from other children, taking refuge in a bowel of the unknown place. After waking up from a nightmare, she starts to make her way back to the outer world, but as the story proceeds, she discovers herself suffering an unbearable pain that gradually weakens her. As a child sees her, he throws a piece of bread to help her.

After knowing about the escape of Six, The Janitor starts chasing her in the lower parts of the Maw. He will chase Six until she manages to defeat him by damaging his arms from his tiny body using an elevator door. During the chase, she transcends through the Maw, and then, unfortunately, she is affected by pains again, which she overcomes by having a dinner of a living rat.

The Entry of “The Lady” In the Game 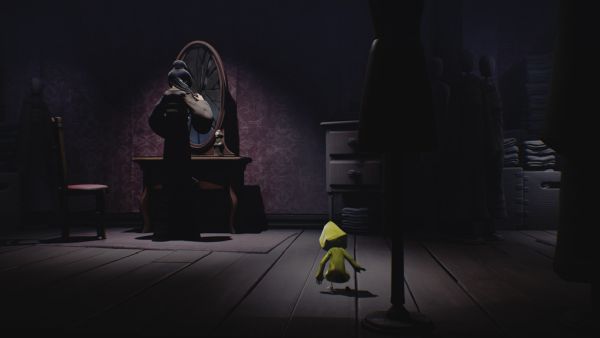 Moreover, Six gets into the kitchen-section, where she faces a team of two chefs that are preparing The annual feast of The Maw. Both chefs understand Six as a trespasser and struggle to catch her following the same way as the Janitor, but she successfully eludes both chefs by grabbing onto one of the moving hooks used to transport meat. After overcoming a variety of difficulties, she approaches a guest area, where The Maw’s overweight guests gorse themselves on a variety of food. However, the event is organized by a woman known as The Lady, who takes care of the guests by maintaining a specific distance. All guests are seemed mad for food, and they also attempt to eat Six, but once again, her unbelievable speed and fast reflexes allow her to escape from the party of mad people.

Again, the hunger-pains return to Six and makes him very weak. After that, she discovers a small-friendly creature named Nome, who offers a sausage to Six, but surprisingly she pushes the food aside and eats the friendly creature within no time. Once ingested, she starts following The Lady up to her living room, where she has appeared. After another escape, she discovers a magical mirror that looks to have a dangerous effect once focused on a woman. She makes the mirror direction towards the woman until The Lady loses her power and falls to the ground. At the exact time, the hunger-pains again start to disturbing Six, and she bites down the neck of her fallen opponent.

Six consumes the Flesh of Blood of The Lady

In the above paragraph, we mentioned how Six approaches The Lady’s living room and how she forces her to lose the balance and falls onto the ground. After feeling the hunger-pain, Six bites The Lady and start consuming her blood. After performing this action, she is somehow capable of draining the life-force of other people. As we mentioned, she is the really smart protagonist, so she starts using the power to kill the obese guests and then leaves The Maw through the main entrance and disappeared into the sunlight while some Nomes watch. After reaching the ocean, she heard the sound of a boat’s horn from a distance.

Similar to other characters in Little Nightmares, Six can’t speak, but you can enjoy her incredible personality through her actions. Throughout the game, the protagonist shows the characteristics of an anti-hero, and she doesn’t care about anything, even rescuing innocent children who are trapped in an unknown location, The Maw. She has only one objective, and that is her survival at any cost. In short, she’s so mean and can do whatever requires for her survival and escape the resort alone or with a small or no help from other characters. Throughout the game, the protagonist is suffering from an insatiable hunger-pains, and she needs to eat anything to satisfy the pain. If she can’t do that, then the pain will gradually increase which becomes a cause of her weakness.

As I mentioned above that on once place Nome offered her to eat sausage to satisfy her hunger, but instead of eating sausage, she ate the person who offered them food. Despite her wacky and animalistic behavior, Six shows a high-level of cunning and intelligence, being so smart to evade or hide from the attacker because of her small size. The character has a sharp mind which she can use to solve a set of tricky puzzles within no time. With her tiny limbs, she can climb on anything fast to save her life. After murdering the Lady and consuming her powers, Six starts to live up to the title of the game to become the master.

In this edition, the game lets you engage yourself in epic gameplay, in which a dark tale will confront you with the dark memories of your childhood. Set on an epic journey of shadow-filled adventure with a quite interactive storyline, a unique art style, and outstanding sound work that ensure to offer goosebumps and chills. During the game, you will find out a detailed world that damages the line between nightmares and dreams as you help a little character named Six escape The Maw, a land full of corrupted souls who are searching for their next meal.

Secrets of the Maw 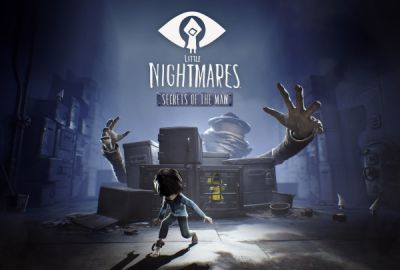 The game introduces three different Downloadable Content Pack, offering a different perspective to explore the adventures of Six.
The first DLC pack was published in July 2017, second in November 2017, while the last DLC pack released in February 2018.
Three DLCs are the following:

Dylan has a passion for PC games of all kinds since he was a kid. He spends hours exploring and diving into the fascinating world of gaming. When he is not playing, he likes traveling and working on his retro motors collection.