GAMES
136
0
previous article
Warframe Tier List – What is the Best Frame for you to acquire in 2020?
next article
Wraframe Specters And Why You Need Them 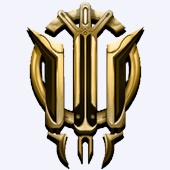 Ducats are the main currency that you use when trading with the void trader, Baro Ki’Teer.
As you probably know, Baro Ki’Teer will arrive every two weeks to the Concourse section of the Tenno Relays station
And will stay there for 48 hours before he disappears.
You can find Baro’s arrival time and other warframe alerts in this link.

For every trade with Baro you’ll need game Credits that are acquired by doing regular missions
and Ducats which are a unique currency that can only be acquired by exchanging Prime parts.
With that, you can buy Prime weapon parts, Prime Warframe components, Prime Blueprints, and Prime Mods from Baro.
Note that you can buy some Prime mods in the market but the tarting tax is quite high 1 million credits.

Where to find Baro Ki’Teer 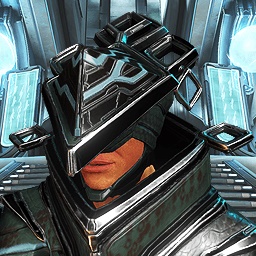 Baro Ki’Teer visits a random relay each time.
24 hours before Baro arrives you can see a little icon that floats over the star chart towards the relay Baro will visit.

How to get Ducats fast in Warframe

You can get your first free 200 ducats from the Nightwave, Intermission II at Rank 4 along with ‍40,000 credits.
But this will not be enough for getting mods and other parts so you need to have more ducats, at least 350 ducats and
150,000 credits for accruing one Prime mod.

The best and most easy way for getting Ducats in Warframe is to open Void Relics.
Doing a void mission will enable you to open relics and to get prime parts out of them.
So the best strategy for getting Ducats is to do Void Fissure missions,
you can find in the top right corner of your Navigation screen (a flame icon). 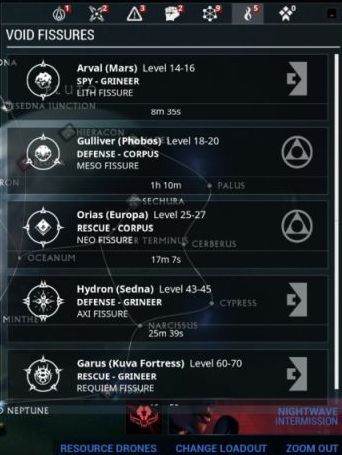 Before you start a void mission you need to select the Relic you want to open.
If you have enough void traces you can use them to refine the relic so it will have a higher chance
for getting a more rare item when it opens.

For opening the relic you need to obtain 10 Reactant (a glowing yellow substance) that are dropped during the
mission by enemies, only then the relic can be open.

The reward intervals per mission type are as followed:
Defense: 5 waves
Disruption: 1 round
Interception: 1 round
Survival: 5 minutes
Excavation: 200 Cryotic

When the mission ends you’ll also get void traces used to refine void relics to more rare ones
and fixed Bonuses per Interval. the first 5 bonuses are: 1.25x Affinity,1.25x Credits,1.25x Resources,1.25x Resource Drop Rate,
a random Exceptional Relic, and it goes up to the 10’th interval.
Past the fifteenth interval, Radiant Relics will be received on every fifth reward interval.

For me, the best way to open many relics and to collect many prime parts fast is by doing endless Survival or Defense missions.
Survival missions are even faster because every 5 minutes I can open a relic and equip a new one.
So in 30 minutes of Survival mission, I can get 6 prime parts with a minimum effort (unless it’s a Forma Blueprint).

I use nekros prime for Survival missions because his 3’rd ability desecrate cause the enemies to drop additional loot and personal life support modules.
Therefore with nekros there is almost no need to run after life support modules that lotus drops and I can stay in one place for a very long time.
The enemies keep coming to me and the air supply gets replenish from their loot.

But to be honest, not many low levels survival or defense missions are available in the void, so the next best option is doing excavation missions.
You can crack open relics every time the excavation is complete as this an endless mission.
For every excavation cycle you’ll get 100 Cryotic (or 200 with booster) which is almost the only way to obtain this resuorce.

The prime part value in ducats can be: 15, 25, 45, 65 or 100 depending on how rare it is.
You can find the full list in warframe wiki.
When Baro Ki’Teer appears, go to one of his Void Trader’s Kiosk for selling prime parts and getting Ducats in exchange.
Then you’ll be able to use these ducts for buying other prime parts you want Baro.

While there is no direct way to trade Ducats for Platinum there is an alternative to that.
If you have enough Platinum you can trade it for prime parts and then sell them to the Void Trader for ducts.
In warframe.market there is a tool called DUCANATOR which shows the ducats/ plat ratio and some other useful columns.
You can use it to find cheap prime parts to trade for Platinum. 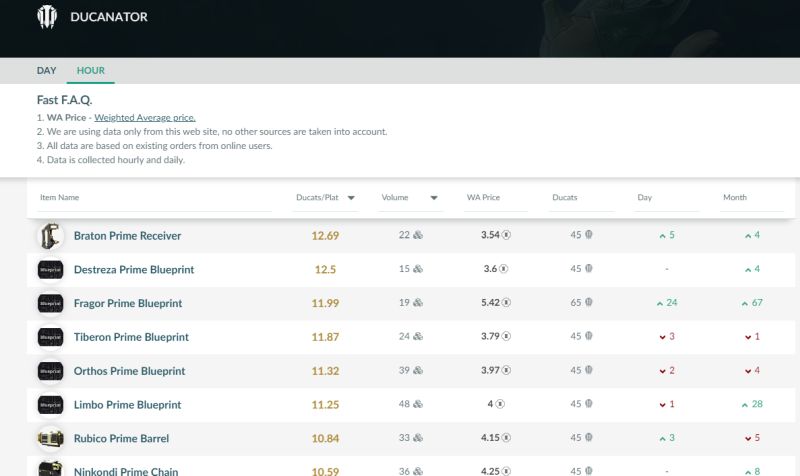 Prime Junk part is a name for a cheap part that can easily be obtained because their value is not likely to rise.
A few examples are orthos prime, bronco prime and lex prime.
If you want to get Ducats without the need to run a fissure mission, look for players that are selling prime junk.
They will trade 6 unwanted prime items for around 12 Platinum so you get at least 90 ducats (6*15) at low cost.

Of course, if you have enough prime parts that you don’t need you can trade them for Platinum,
Therefore it’s another way to farm Platinum in the game.

Buying Baro’s items or primed mods from other players 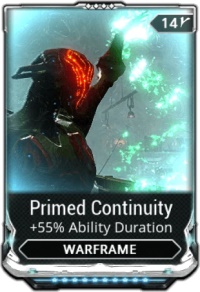 Most of Baro Ki’Teer items can be traded with other players as well as primed mods.
For any Primed mod you buy from another player and not from Baro You’ll have to pay a trade tax of 1,000,000 credits.
The Tax goes to the “system”, not to the seller and it is for limiting such trades for new players and to dilute credits from the game.

The best way to get Ducats is by doing void fissure missions and opening relics.
The more relics you open the more primed parts you’ll have and you can sell them for Ducats.